What’s The Difference Between MANS and Total Six Pack Abs? 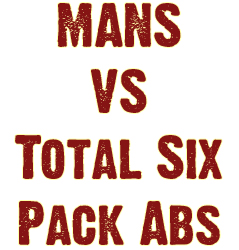 Man, the above question lands in my inbox a LOT!

People want to know what the main differences are between the MANS diet (a CKD diet), and the Total Six Pack Abs program.

It’s a good question and deserves an article of its own. That way everyone who wants to know can get the info AND I can point further queries to this post instead of typing a lengthy response.

So here’s a round up of the key differences….

This is the main difference. When you’re priority is to build muscle, opt for a MANS or GLAD style diet. When you want to focus on cutting fat, go for TSPA.

Yes, people have built muscle and lost fat simultaneously with MANS, BUT, you need to be CERTIFIABLY RIPPED to see your six-pack . People that succeed in building muscle and losing fat on MANS tend to be those starting off at higher body fat percentages. You can lose fat but only to a certain extent.

There comes a time when you have to prioritize getting shredded i.e. get below 10% body fat (women below 17%) – this is where TSPA comes in.

TSPA is better suited to men at-or-under 16% body fat, and women at-or-under 24% body fat. Heavier people CAN use the system successfully but in these cases I recommend that you cut in cycles i.e. implement the program for around 8 weeks at a time, come off it to maintenance calories for around 3-4 weeks, and then go back to cutting.

(2) MANS is just a diet. TSPA is a FULL program. The Total Six Pack Abs system is a 3-prong approach…

What makes TSPA superior to other programs is that each one of the 3 factors above actually INCREASE in intensity throughout the program.

This is the secret of those who KEEP losing fat week on week VS those who stall, lose motivation and QUIT! Abs can be attained quite quickly if the fat keeps coming off week on week!

(3) Both Diets Are Carb Cycling Diets. HOWEVER, TSPA gives very precise amounts of protein, carbohydrate and fat to eat based on YOUR body.

There are FORMULAS in the book which will reveal the EXACT CUTTING macronutrient grams for both the low carb AND carb up section of the diet. As the carb-up is where people may start adding a bit of fat in MANS, the formula I have created for the TSPA carb-up is LASER-PRECISE.  You will re-fill your muscle glycogen stores to full capacity without so much as a gram spilling-over into fat storage.

(4) One more point of the carb-up differences. You may find it surprising that the TSPA carb-up will focus on HIGHER GI carbs, rather than lower ones. Those TREATS are back on the menu! Inside the book you’ll discover the science of why this is the case and why it’s BENEFICIAL.

(5) The MANS diet is pretty much always the same i.e. you eat the same amounts in the same type of ratios. The abs diet changes as you proceed through it. It’s basic structure is the same BUT the simple changes are necessary to encourage the body to KEEP giving up its fat stores for energy. After all, the last thing we want is a nasty stall!

(6) MANS will use predominantly dietary fat for energy. TSPA will use BODY FAT also and will actually INCREASE its body fat usage over the course of the program!

Ok, this isn’t an exhaustive list. To cover it all I’d have to pretty much re-write the entire book right here!

As previously stated, there comes a time when it’s TIME TO GET RIPPED. MANS will not take you to that level, Total Six Pack Abs will.

Speaking of getting ripped; as it’s June, my cut will be starting very shortly. For those of you following me on Twitter, you may remember that towards the end of 2008, my carb-ups were getting VERY dirty. Well, I pretty much kept it that way – seems I’ll have my work cut out for me this summer! It’s no probs though, it takes some effort but at least I have the CERTAINTY that it WILL come off pretty easily.

By the way, if you didn’t see the pics from my first successful cut, check them out. Yes, I was skinny back in the day but had built a solid base – read the accompanying article for the explanation.

For those of you who are interested in torching your unwanted flab this summer, check out the TSPA page. I recently decreased the price from $47 to $34.95. I’ll keep it there for a short while to get the material out to more people for the summer cutting season.

Get LEAN and Stay LEAN!

P.S. I also seem to get a lot of guys in their 40’s asking me will it work for them. In short – YES! I have just received a testimonial from just such a person on the TSPA page. Don’t worry, I only use REAL testimonials from REAL people!