How Did This Guy Gain 3 Inches On His Arms In 8 Weeks? 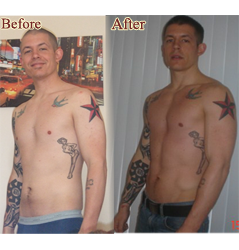 Want to find out how one MuscleHack reader:

Yes, once again I’ve had the great pleasure of receiving a remarkable testimonial from a reader.

Once again it was from someone in the US military.

Once again he used the GLAD bodybuilding diet for his nutritional strategy, THT for his training protocol, and Total Six Pack Abs to cut just prior to the bulking cycle you’re about to read about.

His name is Justin Van Arsdale. Enough from me, let’s see what he had to say.

The first photo was taken sometime at the end of 2009.

I am on GLAD currently and doing quite well, just chasing my daily caloric intake around. So I’m at 168 lbs and approx 10% body fat, according to my accumeasure at least. I put 3 inches on my biceps, 1.5 inches on my thighs, and trimmed my waist down a little – it is all mostly muscle now.

And a side note for you, I have pulled a good buddy in on the THT cycle with me and he has lost 31 lbs of fat since starting.. that is impressive. 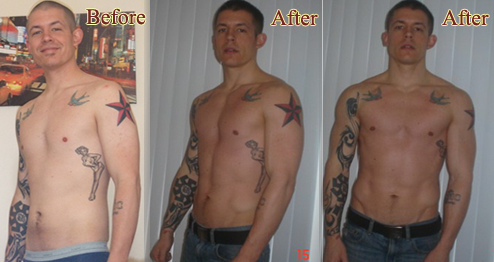 Here is quick background for you. I served in the US Marine Corps for 5 years, I was a CH-46 and H-3 Crew Chief. I served for the Presidential Helicopter Squadron and was Crew Chief aboard Marine One for George Bush Oct 2004 to Sept 2005. I got out of the Corps and began working for Lockheed Martin in the cold New York State.

Cold and snowy winters and a lack of motivation let me get out of shape as well as being behind a desk quite a bit. I was never very over weight but just not in shape. I found your website and have been making progress since. I am in better shape now than when I was on active duty!!!

Yes the change is quite good, but THT and GLAD have made it quite easy. Once I pulled together a spreadsheet of the foods I eat and their nutritional values it became very easy. I have told quite a few people about your site as well as THT and GLAD.

I certainly have some areas that need improvement, my chest namely, as that is my slowest growing body part. Overall I feel it’s a good change but I can’t wait for the next THT cycle.”

Justin practiced the key to success: consistency. If the strategy you’re using is sound, and you consistently do what is required of you to implement that strategy, success is INEVITABLE.

In terms of SPEED of transformation, this is one of the best MuscleHack testimonials yet.