2 US Soldiers Get Ripped And Show You Their Pics! 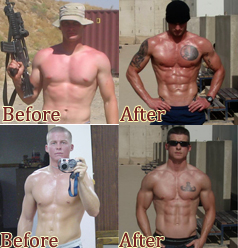 You’d be surprised at how many US soldiers stationed in different parts of the world follow my programs!

Whether it’s a workout program like THT, or a diet program like MANS, GLAD, or Total Six Pack Abs (diet & workout), they commit to a goal, then achieve it! I often hear back from them thanking me for the program(s), which is always good 🙂 .

However, this is the first time I received pics from any of these guys. And it came in two’s!

Curtis Weaver and Steve Stone sent me their before and after pics and I’m impressed! I’m sure you will be too.

Read what they had to say then check out the pics below.

Chris wrote on behalf of both of them saying…

We are both 29 years of age.  We are in the United States Air Force and are Explosive Ordnance Disposal (EOD) Technicians, better known as the Bomb Squad in the civilian sector.  Our job is to disarm the roadside IED’s you see and hear about in the news.

I found your website about two months ago and started the G.L.A.D. diet and THT training. I have worked out for the last 7 years, but I have never seen results like this in only two months.

My friend, Steven Stone and I have been on two deployments together, one to Afghanistan in 2005 and one to Iraq at this present time. We are finishing our tour and we both wanted to send in our pictures and testimonials.

In 2005, we were a few years younger and determined to get in shape. We worked out hard every day, but never really took the time to consider our diet. We did not eat properly, nor did we follow a specific workout training program. My before picture was when I got home from Afghanistan in 2005, yes I was in shape but did not achieve the results I was looking for. Steven’s picture was towards the end of the deployment, and you can see we were both in shape, but not what we achieved this deployment.

We arrived in Iraq in August of 2009, and both wanted to get in amazing shape. I did not do any research on dieting or training programs, rather we just hit the gym, worked our butts off, and tried to eat as “healthy” as we could. After about 4 months, in December, we were in pretty good shape, but we were both frustrated because we were not getting great results, and we were working out really hard. So, I did some browsing online for diets… and I stumbled upon the G.L.A.D. diet on your website. I read the post online, and then downloaded your book and read that thoroughly. We both thought your THT training program sounded amazing, and were going to do the G.L.A.D. diet as well.

We started out by cutting for 2 weeks following the G.L.A.D. diet of no more than 45 GL’s per day, and no more than 10 GL’s per meal. We took pictures after that first cutting cycle. We were already impressed with the results, and was only a couple of weeks. We then decided to do the bulking phase of the G.L.A.D. diet and try to put on some mass without gaining any fat as stated on your site. The results were even more amazing, and we both put on about 5 pounds of muscle in 6 weeks, and did not seem to gain any fat as you promised.

The last two weeks of our deployment, we went back to the cutting cycle and took final pictures. Steve and I were totally committed to the G.L.A.D. diet (no cheats for 2 months), and followed your THT program….. and the results were amazing bro.  You definitely have something going.

In just 2 months, our bodies were totally transformed. We both will be following the diet when we get home, and I will be glad to send more progress photos. Again, I would like to thank you for the hard work you put into your site! Keep up the good work Mark!!!

P.S. I will be trying to progress even further myself… its a lifestyle… and I love it.  The diet is actually pretty easy to follow, and you can still eat great food.  It just takes alot of consistency and commitment. I was limited on what I was able to eat since I was in Iraq, and dependent on chow hall food. But even still, we achieved the results. 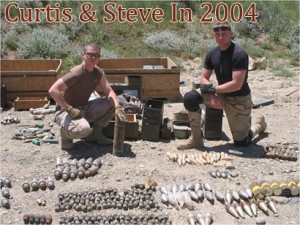 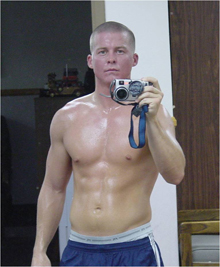 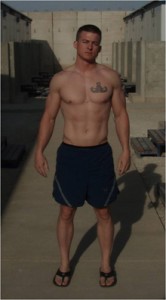 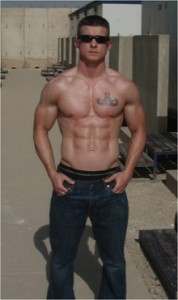 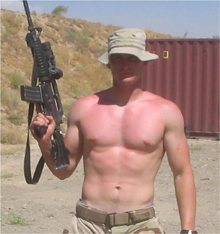 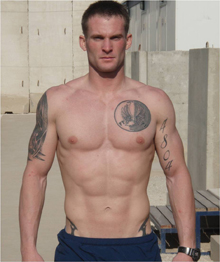 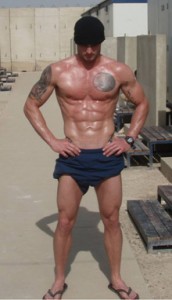 Not only are the transformations impressive themselves, but the commitment of these guys has to be applauded. Having such a small selection of food, they STILL managed to make the diet work. They still managed to keep track of their GL’s per day and per meal.

Controlling their blood sugar and therefore insulin, they allowed the metaphorical gates that keep body fat stored to open and let it be used for energy.

You must begin to accept the absolute FACT that fat storage and loss is a hormonal issue. However, let no-one deceive you that you can get RIPPED without being in a calorie deficit. You simply must! Combining hormonal manipulation AND a negative energy balance is the foundation of Total Six Pack Abs and is the fastest way to a six-pack without a doubt!

Yes, obese people can attain a ‘normal’ weight by simply controlling their blood sugar with a low-carb or low GL diet. I’ve seen it happen. Calories take care of themselves for these people (through satiation and possible increased metabolic rate).

Getting ripped is about combining the wisdom from both schools of thought into a GREATER wisdom.

I hope Steve and Curtis have managed to motivate you. I always thank people who contact me to submit testimonials. It takes courage to put yourself out there, something most people aren’t willing to do. THANK YOU GUYS!

At the end of the day it’s not what we CAN do. It’s what we WILL do!

If we truly commit to something we are capable of virtually ANYTHING.

Will YOU do it?