How To Build Muscular Pecs Like A Cartoon Superhero! 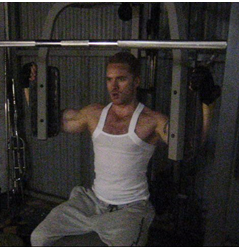 If you want to develop huge, beefy pecs like a cartoon superhero, read and watch the following.

Previously I’ve said that in order to maximize growth stimulation for any muscle you must do the following:

This is because you can only recruit the maximum number of fibers in a muscle by having it move in harmony with the motion it is primarily designed to produce in the body. That was a bit of a mouthful, you might want to go back and read it again for clarification.

To recap, for the biceps we said that:

we should use a cable and a floor pulley to ensure that we are fighting against the resistance at the peak contraction point i.e. the point where there is maximal muscle fiber recruitment (RESISTANCE AT PCP)

We therefore concluded that cable preacher curls would get the job done to great effect.

So how do we apply this to the chest?

Well the function of the pecs is to bring the arms across the chest, sometimes referred to as horizontal flexion. Raise your arms up and out to the side, then bring them towards each other in front of your body until you can clap your hands, that’s what I’m talking about here.

Immediately you may think of a fly movement to accommodate this e.g. lying dumbbell flies.

While this DOES fulfill the criterion of ‘function’, it has a MAJOR flaw.

When the pecs are maximally contracted (dumbbells are touching at the top), there is virtually NO resistance. You are basically holding the weights above your body against gravity. The hardest part of this movement is at the bottom; the point where there is least fiber recruitment and the opposite of what we need.

There are 2 options here then for maximal growth stimulation. Cable flies and the pec deck.

While performing flies with cables DOES ensure that that there is great resistance at the PCP, you also involve the biceps and run the risk of having the biceps fail before the pecs do. In this scenario you’d reach the end of the set content that you had hit muscular failure and couldn’t perform another rep. However, it WASN’T failure of the intended body part i.e. the pectorals.

We therefore need to take the biceps out of the equation and there’s one way to do it, the pec deck.

This exercise ticks all the boxes.

I shot a video of me demonstrating it, check it out…

(if you liked the video, please give 5 stars on YouTube, thank you 😀 )

Notice that I am pausing at the PCP briefly before lowering. Also note the slow pace with which the negative portion of the rep is completed. You only need to look at your pecs at the PCP for evidence of the great stimulation; those striated fibers are really contracting like CRAZY!

Perform this exercise as shown and do it to failure – don’t wimp out early.

Start as soon as possible and carve out a MUSCULAR, BULLET-PROOF chest for yourself.

In my next article, I’ll cover triceps. Remember, they make up 2/3rds of your arm area, so big arms really depend on you working them correctly.

P.S. You can perform these without any elbow flexion i.e. with straight arms. Some people find the regular version painful on the frontal delts. As long as your upper arms are resting against the pads, it doesn’t really matter what angle your forearm is at.