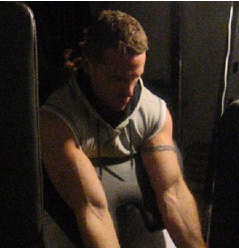 If you’re someone who is frustrated with your biceps, or you’ve got big biceps but want them even bigger, don’t go anywhere for the next 5 minutes!

I’ve a new favorite exercise that I believe is the most effective exercise for stimulating growth in the biceps.

Yes it’s a preacher curl but NOT with a barbell or curl bar, and for a very good reason.

Part of the research I began last year which culminated in an experiment which saw volunteers gain up to 0.8 of an inch on their arms in a few days, involved finding out how to recruit and fatigue the maximum number of muscle fibers for any 1 exercise.

This was only a portion of the research but the facts are as follows:

The problem I therefore see with standing or sitting barbell or dumbbell curls is that the resistance starts to ‘fall off’ the biceps at the mid-point of these exercises. The mid-range area of this movement is where maximum resistance is, NOT in the maximally contracted position.

The traditional preacher curl with a barbell (or EZ bar) also suffers the same setback.

So how do we ensure that we have maximum resistance at the peak contraction point?

What equipment can we employ to make sure that we have to fight against the load at the top of the movement?

A cable running from a floor pulley is just what we need here.

Grab a loaded barbell and curl it to the peak contraction point and you could virtually hold it there all day. Now sit at a preacher bench and curl an attachment from a floor pulley until your forearms and upper arms are at right-angles; you’ll feel the resistance pulling at you and this is EXACTLY what we need.

I’ve made a video to demonstrate it for you guys.

Note: Let me point out the following before you watch it. I workout in my detached garage with no heating. There is no ceiling light, just a lamp. As it’s winter, it gets dark here around 4pm so the lighting isn’t very good. It was also sub-zero temperatures outside with snow on the ground, so if you can ‘see’ my breath, that’s what’s up. While I do spend (invest) a lot on equipment because it’s too important to go cheap, where that equipment is doesn’t matter in the slightest to me. I don’t need a warm, modern gym to train. I’d train outside in the cold as long as I have the right equipment!

Anyway, now to the video…

(If you have a second, could you go to the YouTube page and rate the video up? Thank you 🙂 ).

Notice that I am taking a second to pause at the top of the movement to emphasize the opportunity for muscle fiber recruitment.

If you want huge biceps I highly recommend you incorporate this exercise into your workouts. In THT simply replace one of the bicep exe

rcises for cable preacher curls done with the form seen in the video (use a straight bar attachment, not a curl bar).

[UPDATE: Please read this post for a more thorough understanding of why this type of exercise is a superior movement for growth.]

Your gym may have a preacher machine like the one shown to the right. These aren’t bad but the path of movement is restricted a little by the machine so I  think cable preachers are better.

Note: If you’re curious as to whether or not this movement featured in the workout protocol for the ‘Arms Blast Experiment’, yes it did. But it WASN’T simply a set done to positive failure. The intensity was brought well beyond even this degree of stress. Also, the triceps (which comprise 2/3rds of your arm size) were worked in a similar fashion and to an extreme level of intensity.

This is exciting stuff and will have profound implications for your future workouts and DEFINITELY for your results!

In my next article I’m going to go more into this notion of maximum fiber recruitment and what it means for YOU and your growth.

P.S. gloves I’m wearing in the vid are black valeo ocelot (with a big hole in right index finger thanks to my dog!)