How To Flip The ‘Growth Switch’ For NEW Muscle Gains 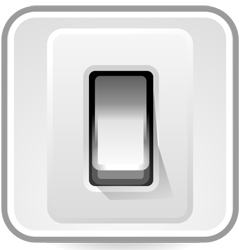 “The necessary muscle stimulation to force adaptation occurs in the last few reps of a set.”

That’s a quote from my free book Total Anabolism. There’s more to this and if you want to MAXIMIZE increases in muscular size, it’s important for you to understand. We’ll look at muscle fibers, evolution, and the ‘anaerobic window’. Let’s get stuck in…

There is a point in a set where the ‘growth mechanism’ is activated, below which no muscular growth is stimulated.

You can liken this to a switch that’s flipped when you cross this threshold. I contend that this point is ‘failure’. When you reach the point in a set where you cannot possibly complete another positive repetition unassisted, you can say you’ve reached failure.

Muscle growth is actually a defense mechanism by the body. Much in the same way that a blood clot or a suntan is. Of course, a sufficient stimulus is required to produce this type of adaptation. Unfortunately for us humans, our bodies would much rather we built NO muscle whatsoever.

Muscle is metabolically active tissue i.e. the more of it you have, the more calories are required to keep you alive. Our bodies have adapted to expect long periods of hunger. They are also very efficient at storing/synthesizing body fat in anticipation of these periods.

Modern man is faced with the dilemma of wanting to be lean and muscular, while his body wants to have no ‘excess’ muscle (beyond normal levels) and a ready supply of fat for when famine strikes!

It should therefore be abundantly clear that without a really good reason, the body will not readily enlarge upon its existing muscle mass. Except for the neophyte or genetic freak, that reason is ‘failure’.

Our most powerful muscle fibers, and the ones that respond most to weight training, are our type 2 fibers. These are our fast-twitch, anaerobic, power fibers. Specifically, there are Type 1 fibers (slow twitch) and type 2a, 2ab, and 2b fibers (fast twitch). (No. 4 in the illustration is a muscle fiber). 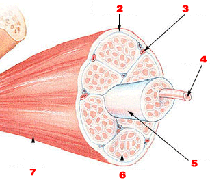 Here’s the interesting thing about muscle fibers: They are recruited SEQUENTIALLY. This means that as a set increases in intensity and muscle fibers fatigue, more fibers are recruited from the NEXT fiber type in the following order:

Logically then, if we want to recruit and fatigue our type 2 fibers, we have to bring our set to a point where sufficient intensity is occurring to call into play the relevant motor units for the type 2b fibers.

In everyday life, the brain will not send out this signal unless there is some sort of emergency situation at hand. However, muscle hackers can voluntarily recruit these fibers by working to a point of muscular failure.

If, for example, a guy does a set of 10 reps, the tenth rep being the last rep possible, he won’t be involving his type 2b fibers until the 9th or 10th rep. All other reps build up to this point as fibers were recruited sequentially, and deeper inroads were made into starting strength levels through ever-increasing intensity.

It is that last, most uncomfortable, rep where the ‘growth switch’ is flipped. Bring a set to this point and you can rest easy knowing that you’ve done enough stimulate growth.

An incorrect interpretation of this may be to say that very high rep ranges can stimulate as much growth because if you fail at rep 30, you’ve still progressed through the sequential recruitment, right?

Not really. It is well agreed upon in the fitness world that sets lasting between 60-90 seconds or less will produce more in the way of anaerobic adaptations than aerobic ones. As I’ve stated before, because our ability to recover from mechanical work is not unlimited, sets lasting more than 1.5 minutes will SPLIT adaptations between both the aerobic and anaerobic systems.

While there is nothing magical about a certain repetition number, a good rep range and cadence should have you terminating a set around the 1 minute mark. Therefore training systems that advocate very high rep ranges, or even the SuperSlow ™ movement, are not optimal for those prioritizing muscular growth.

A question I often get is, “How do I know when I’ve reached failure?” I thought about it and came up with the following…

When you think you may have reached failure, try another rep. If you get that rep, try another one and so on. Basically, a set doesn’t end when you decide, it ends when your muscle(s) fails. If you find that you can hammer out 3 or 4 more reps every time you use this method, you are using weights that are too light. Often when people complain that they can’t reach failure, it’s simply a case of submaximal loads. So increase the weight, there’s nothing mysterious about failure, you’ll know it when you hit it.

Training ‘not-to-failure’ can lead to ‘fake progression’. If I use a weight that represents only 75% of my 10-reps-to-failure weight and lift a 10-rep set, I could ‘progress’ for many months by increasing by a rep here, an incremental weight increase there, and so on. My numbers would be going consistently up but I wouldn’t be progressing in actuality because:

And I wouldn’t actually be growing because:

Of course, training with the requisite intensity to trigger growth does involve a longer recovery period and this can confuse some people. Those bodybuilders who train the same body part 3 times a week will fall into this category.

By the time they perform their second workout of the week (hitting the same muscle groups), they haven’t even recovered let alone overcompensated. Oftentimes, they’ll not be able to even repeat their previous performance let alone beat it. This disappointed guy goes back to his old system swearing never to train to failure again.

This longer recovery is for a very good reason though. Those powerful, type 2B fibers we want to hit, also take the longest to recover and overcompensate. The fact that you’ve flipped the growth switch and NEED that longer recovery time should put the over-anxious gym-goer’s mind at ease when he feels he’s not training enough.

So get to the gym and flip that switch!