How To Be Stronger & Leaner In 5 Days 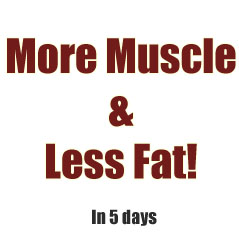 What if you could be STRONGER and decrease your body fat percentage over the next few days?

This study [1] has found that supplementing with creatine does just that in only 5 days!

17 trained men were given either creatine or a placebo and tested.

1 rep max increased for squats in the creatine group by 11% more than the placebo group. Furthermore, their body fat percentage DECREASED slightly.

And no, this study was not funded by a supplement company.

Now to an age-old question…

Should you load with creatine?

This study would suggest that you should. They concluded,

“The study found that a 5-day creatine loading regime coupled with resistance training resulted in significant improvements in both average anaerobic power, as measured by the 30-second Wingate test and back squat strength compared with just training alone.”

So by using the loading technique, (4 x 5g servings per day for 5 days) results should be evident before the end of your first week!

The researchers went on to say,

“However, 2 days of supplementation was not sufficient to produce similar performance gains as that observed at the end of 5 days of loading in trained men, despite increases in creatine uptake in the body.”

So don’t expect miracles within your first day or two.

While you can just take 5g of creatine per day to allow your saturation levels to reach peak over a longer time, why wait? The 20g a day loading technique for 5 days is tried, tested, and effective.

So tell me, are YOU taking creatine? I’m asking because I’m interested to hear from those who are not and why not.

If it’s a safety concern, I would suggest you read these articles about what creatine actually is and how it has been thoroughly tested and consistently proven to be a safe supplement.

What is Creatine and How Does it Work?

Also, creatine monohydrate is still the best form of creatine on the market. Don’t believe supplement companies on this one; read this for the science.

As for brands, I recommend MyProtein’s creatine monohydrate or creapure for all European readers, and Optimum Nutrition’s Micronized Creapure Creatine Monohydrate for North American Readers.

reference: [1] Effects of two and five days of creatine loading on muscular strength and anaerobic power in trained athletes https://www.ncbi.nlm.nih.gov/pubmed/19387386