Extra Protein Will Not Make You Fat?

Ok, this is one of those occasions where I may be forced into a re-think.

I’ve always been of the opinion that consuming more protein than you need (even for us lifters) will result in fat gains. First the amino acids are converted to glucose (a carbohydrate). Then the extra carbs can be converted into fatty acids (body fat).

It’s the widely held view that ANY surplus calories (from whatever source – protein, carbs, fat) will end up stored as body fat.

While this is biochemically possible, it’s a very complicated process, it costs energy, and it seems that the human body just doesn’t really want to do it. 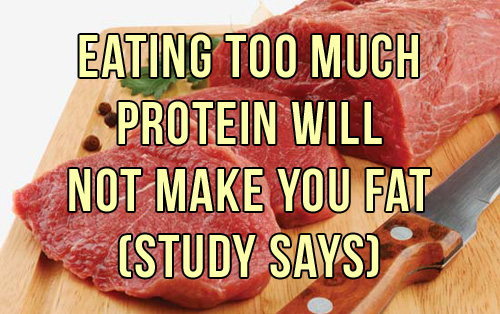 Researchers in a metabolic ward setting force fed 3 groups of people 1000 Calories above maintenance every day for 8 weeks. That’s 7000 surplus Cals a week – enough for 2lbs of fat (there are 3500 Cals in a pound of fat).

The 3 groups ate the same number of Calories, but had varying amounts of protein:

But, the interesting result lies in the variations in body composition between the 3 groups. Despite the Calories being equal, the effect on lean mass levels were very different. Yes, the idea that all Calories are equal and make you gain fat equally is total bunk. 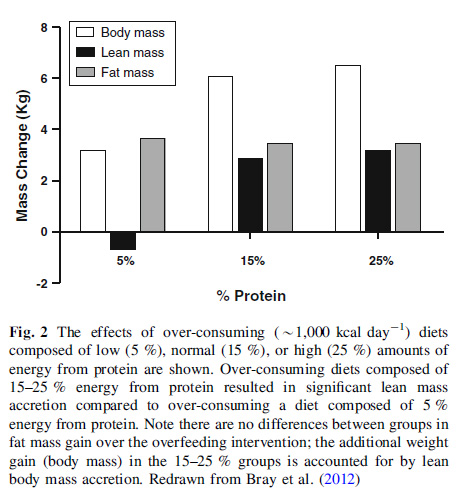 Although excess Calories can make you fat, if you get that excess exclusively from protein, it is unlikely that it will contribute to body fat gains.

TAKE HOME MESSAGE: Let’s say you’re currently cutting to get a six pack and you’re hungry and you want to eat above your calorie allowance; don’t reach for some chocolate or even rice. Grab some turkey, or shrimp, egg whites, or whey, or some other ‘protein-only’ food. (See my tuna patties recipe as an example). Also note that a low-protein intake may very well result in a loss in muscle mass. 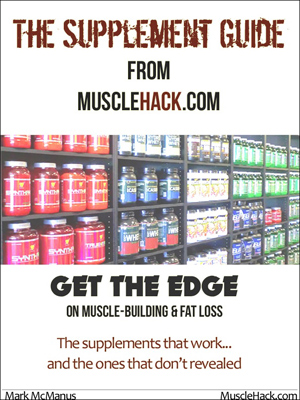 NOTE: If you want to know all about which supplements actually work, I created a FREE supplement guide for you! It reveals all the supplements that work, the ones that don’t, and the ones that are actually dangerous. Get this and keep it with you – it’ll save you a ton of money!

The download link appears here immediately after clicking the button, you don’t have to open your email. Enjoy!

Thanks! Here's what you wanted. Enjoy...

It’s important to note that this doesn’t necessarily mean muscle tissue gains. Some of it may have been. But much of it was probably amino acids being converted to glucose and stored in the muscle tissue as glycogen. Extra glycogen also pulls water into the muscle to be stored. This would all show up as lean mass gains.

But the important point, however, is that it didn’t turn to fat. In an environment of over-eating 1000 Calories per day, that extra protein not ending up as body fat is very surprising to me. But it’s certainly welcome news!

P.S. I know that putting together a truly effective diet for mass gains or getting shredded abs can be a pain in the butt, especially if you are new to this – that’s why I offer a service where I will do all the tough ground work for you.
You probably don’t know how many calories you need, or how many grams of protein, carbs or fat you need (based on your personal stats)…BUT I DO. Then I can take these numbers and create an exact meal plan for you to hit those numbers spot on! You’ll know what foods to eat and even when to eat them. All you have to do…is do it. No thinking involved. If you’d like me to take care of this for you, see the Get Me Shredded option on my Coaching Page here.