5 Things That Really Grind My Gears 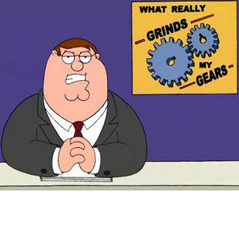 “You know what really grinds my gears?”

I got the idea for this article while watching Family Guy recently. 🙂

So now it’s my turn to vent on things that grind my gears in the world of fitness, bodybuilding, fat loss, and nutrition.

1) Stability Balls. Imagine a piece of equipment that actually RETARDED your progress on the body part it’s supposed to target. Abdominal muscles are actually quite easy to build. It’s losing the fat on top that is the hard part.

Add resistance to your ab movements and go to failure like any other body part and watch them grow, harden, and form that washboard shape you want.

Stability balls REDUCE the amount of force that can be generated by the abs and make for really ineffective workouts [1] [2]. The time it takes to sculpt your abdominals will be significantly lengthened by use of these big balls of disappointment.

You’ll probably have seen people in your gym bouncing around on these things in an effort to get a six-pack. Even if you were to use them, a slow, controlled movement with a pause at the peak contraction point would be the way to go. But the best thing to do is to just avoid them completely!

2) The “Low-Carb Is Unhealthy” People. No science to back up their statements, but apparently just saying it makes it so.

At best they’ll quote a study that showed that a “high-fat” diet lead to unfavorable changes in lipid profile. What they are unaware of, or just plain ignorant of, is that the diet was also high in carbohydrate. Who is recommending a diet high in both carbs and fat!?

A recent meta-analysis [3] of prospective cohort studies evaluating the association of saturated fat with cardiovascular disease is what lead Dr. Krauss to conclude that…

“A meta-analysis of prospective epidemiologic studies showed that there is no significant evidence for concluding that dietary saturated fat is associated with an increased risk of CHD or CVD. It’s the carbohydrate that appears to have most of the effect when it comes to dietary influences.”

3) “Compound Only” Advocates. Yes apparently you can get maximum muscle-growth stimulation in ALL body parts by performing compound movements only. Want big biceps? Just bench. Muscular calves? Just squat. In fact, deadlifting will also make your biceps big too! Bollocks. Unless you’re a genetic freak, this just ain’t gonna happen.

Local muscle growth is a fact. If your goal is hypertrophy, you need BOTH compound and isolation movements. Download my free THT book for a lot more on this issue.

4) Bodybuilders. Shocked? Now I’m not saying this about ALL bodybuilders. But it’s the attitude of some guys that just gets on my nerves.

Flexing and screaming in the mirror at the gym in front of everyone just means you’re a douche.

Spouting your broscience and thinking it’s rock-solid fact without anything to back it up just means you’re ill-informed and quite possibly unjustifiably arrogant. Just because you read something in a magazine does NOT make it true. I’m sure many of you have overheard some “words of wisdom” from other guys in the gym.

Being condescending to newcomers, whether it’s in person or on an online forum is just not cool. You were a newcomer at one time too.

Why not be friendly? Why not be helpful to newbies?

5) Men’s Health “Muscle Building” Routines. If you understand that muscle physiology is the same for all humans, this notion of printing up new, totally different, and contradictory programs every month can be seen for what it is: a way of selling magazines to neophytes and gullible people.

That’s why in THT we start with the fundamentals of Intensity, Volume, and Frequency. Then we flesh it out a little more to give YOU the real deal on how muscle is actually built (and for FREE). These principles are not up for debate and they apply to EVERYONE.

It’s no different from learning the fundamentals of math or chemistry. It is what it is and you can’t change it. Nature is in charge here. You can just decide what you’re going to do to build muscle. You either work WITH nature’s laws, or work AGAINST them and fail.

But I guess they gotta sell magazines after all 🙄

What grinds YOUR gears in this game?

What pearls of wisdom did you pick up at the gym over the years?