Stability Ball For The Abs? 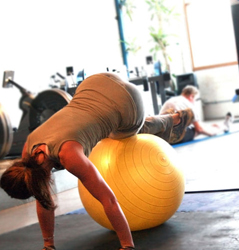 Ever wonder if the stability ball is as effective as some of the fitness ‘experts’ would have you believe?

Can you really build an impressive midsection with a big piece of inflatable rubber?

Let’s take a look at this objectively.

First, let me state that I’m assessing this piece of equipment in relation to it’s ability to BUILD the muscles of the abdomen.

So, what does a stability ball do? It forces the ab muscles to contract because they have to in order to hold the body in a stable position. The instability provided by the ball itself is what forces this contraction.

However, the contractions that can be achieved are FAR from maximal.

Let’s take a quick look at the summary from the following study:

The performance of resistance exercises on unstable equipment has increased in popularity, despite the lack of research supporting their effectiveness. Resistance exercise performed on unstable equipment may not be effective in developing the type of balance, proprioception, and core stability required for successful sports performance. Free weight exercises performed while standing on a stable surface have been proven most effective for enhancing sports related skills.

If “free weight exercises performed while standing on a stable surface have been proven most effective for enhancing sports related skills“, then a stable base is most definitely optimal when training for growth.

The amount of weight (and therefore overload generated) that can be used to contract against while on a stability ball is extremely low. Try crunching on one of these balls with 40 kgs on your chest and you’ll be in a world of pain, and possibly in an ambulance!

It’s quite a ridiculous position to recommend using INstability to enhance an ab workout! You actually perform BETTER with a stable base.

You might want to take a quick look at this study which concludes that there is a LOSS of force output with instability – as much as 59.6% less than under stable conditions!!

Quoting from the summary:

The diminished force output suggests that the overload stresses required for strength training necessitate the inclusion of resistance training on stable surfaces.

I’m in the fitness industry along with the same guys that will whole-heartedly recommend swiss ball type exercises. Why do they do it? Well, there’s a HUGE difference between using your own critical thinking abilities to look at a subject objectively, and simply regurgitating what you read in a text book.

Unfortunately, the unassuming new client isn’t exercise savvy enough to know the difference and often times gets taken for a ride. (Actually, my text book recommended that you could start someone with regular crunches/sit-ups and later move them to the stability ball as a way of periodizing or progressing their workouts to make it more difficult. Jesus Wept! That would be the opposite of what you should do).

Hopefully this article helped some of you out there make better exercise choices.

It’ll also serve as a reference for you when helping other people improve their workouts. If they are shocked when you tell them that the stability ball sucks, simply point them to this article to take care of the rest. If they still want to use it after reading this…….well….some people just don’t want to be helped I guess.