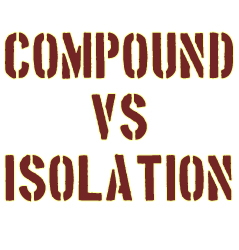 Search the web and you’ll no doubt be advised by most muscle heads that compound exercises are where it’s at.

Some routines out there are ‘compound-only’ zones, excluding the so-called “inferior” isolation movements. Apparently there is something terribly wrong about applying DIRECT resistance to a particular muscle.

Quick definition: A compound exercise is one that involves movement around more than one joint.

You’ll even see guys advise you to steer clear of bicep curls because you can ‘overhead press‘ your way to big biceps!

I’ve read a lot of these type of articles that bash isolation exercises.  They all sound the same. It usually goes something like this…

“If you want big muscles, bicep curls won’t do it. Neither will lateral raises and the like. If you’re going to isolate muscle groups you might as well give up and go home. You need to work the body together or it won’t happen.”

The scientific rationale? Uh, well, none is ever provided.

Like me, if you’re expecting the science, or at least the logic, to follow this bold argument in favor of compound-only routines, you’ll be disappointed.

It appears that just saying it makes it so. Of course, forgoing science and parroting what’s currently popular is all too common in this game.

You might be able to guess where this article is going. Yes I’m going against the grain again. But it isn’t based on opinion, it’s based on facts of muscle physiology.

However, before I go any further, let me say that I like compound movements. Here’s what I think they are great for:

Another argument for compound movements is that they release more anabolic hormones. While this is true when comparing 1 compound movement with 1 isolation movement, over the course of a whole workout, I contend that there’s no difference. In fact, if someone “saves time” by hitting multiple body parts in 1 exercise and hits them all in 20 minutes, he would, in my opinion, release LESS of these hormones than the guy who performs an isolation movement to muscular failure for each body part and finishes in 50 minutes.

And that brings me to my next point…

Since when was saving time the goal of someone training for muscle growth? Yes you shouldn’t train for much longer than an hour at any one time (if you’re a natural bodybuilder).

But in exercise science we identify the stimulus that provides the adaptation we desire, then impart that exact stress to the body. If it takes 60 minutes to produce this result rather than 20 minutes, so be it. At the end of the day, if you’re not willing to spend an hour in the gym, you haven’t got the right mindset for success.

Now, for all but beginners and genetic freaks, I say compound movements can actually be inferior because of the following 3 reasons:

If one muscle within the group being worked is quite weak, it will be responsible for the termination of the set before the other muscles obtain the requisite intensity to stimulate growth. With compound movements, you’re only as strong as your weakest link.

Take the lat pulldown for example:  the weaker biceps and forearms will fatigue before the more powerful lats do, meaning you didn’t thoroughly stimulate the body part you intended to when you selected this exercise!

Compound exercises work MULTIPLE MUSCLES to a LIMITED degree, whereas an isolation exercise can work a SINGLE MUSCLE to its MAXIMUM degree. Think about it, a compound movement DILUTES the resistance across many muscles which is not optimal for growth of the intended muscle e.g. the pecs in a bench press.

Actually, for the example above, the bench press will only impart 40% of the available resistance to the pecs! The rest being taken by the triceps and deltoids.

The PCP or PEAK CONTRACTION POINT is the only point in any exercise where it’s possible to recruit 100% of the available muscle fibers. If the exercise you’re employing doesn’t take the intended muscle into this position, it is absolutely impossible to recruit all the fibers.

Example: the bench press doesn’t bring the arms all the way across the chest and in NO point in the rep can it stimulate all the fibers of the pecs to grow. The Pec Deck can however.

To really understand this, we need to look further at muscle fibers. Read on…

Maximum growth can only come from recruiting as many of these fibers as possible and inducing the micro-trauma that stimulates the compensatory adaptation of THICKER muscle fibers. Thicker individual fibers means larger muscles.

So how do we ensure that we recruit as many fibers to which we impart this stimulation?

Like I’ve stated in the latest batch of articles, you must use an exercise for each body part that:

(1) Works the muscle along the path of its FUNCTION because this is the ONLY way to bring a muscle into its position of PEAK contraction, which is where MAXIMUM recruitment of muscle fibers occurs

(2) Provides resistance in this PEAK CONTRACTION POINT to induce the damage to the recruited fibers. For example, Standing Barbell Curls will not do it for the biceps, but Cable Preacher Curls will.

From a factual standpoint, you can only do this by incorporating isolation movements, and in particular, the ones I have listed in my recent series of articles on the subject as they fulfill the above criteria.

Put simply, an isolation exercise will provide a more COMPLETE stimulation of the fibers of the muscle trained!

In summary, will your next few pounds of muscle growth come from hitting as many muscles as possible in 1 movement? It may help, but it should be abundantly clear that your next slab of hard muscle will come quicker as a result of ensuring that each major muscle worked is done in a fashion that MAXIMIZES muscle fiber recruitment and more thoroughly stimulates those same fibers to GROW once recruited.

Note: The advice in this article applies only when the specific training goal is muscular hypertrophy. Other goals/outcomes require different stimuli to produce the desired adaptation e.g. functional strength, endurance etc. Put simply, if you want to grow, and do it as fast as possible, implement the advice in this post!