The Science Of Fat Loss 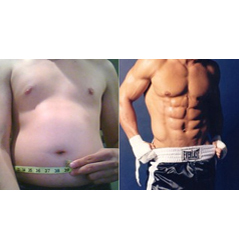 Is it Calories in vs Calories out?

Is it purely hormonal?

Confused? You probably are if you’ve listened to all the conflicting advice out there.

Today I want to show you a couple of videos by 2 people I look up to in this area. Gary Taubes, author of ‘Good Calories Bad Calories‘ and Dr. Doug McGuff, author of ‘Body By Science‘.

I’ll then give my own take on the fascinating info these guys share. Let’s take a look…

* Calories are not that important. It’s where those calories come from that’s more important because of the effect they have on the body’s hormones

* Refined Carbs and sugar cause a quick spike in insulin. Insulin makes you accumulate fat in the fat tissue, especially for those people who are genetically predisposed to getting fat.

* Example: If you give a lean person insulin they will put on fat, even if they don’t eat anymore than they normally do. A higher percentage of those same calories are now being diverted to fat storage.

* Because you are shunting off these calories into fat storage, you’ll have less energy/feel lethargic, and/or eat even more to try and compensate for these ‘lost’ calories. Hence the cycle perpetuates itself: you get fatter and feel lazier.

* Fat loss is a hormonal event.

* The ‘Calories Out’ side of the equation cannot be significantly affected by exercise. Therefore in terms of fat loss, exercise is not that effective. Example, you can’t eat a 300 calorie slice of pie and then burn off 300 calories on a treadmill and think that you’ve broken even. [this was one of the points I made in my ‘case against cardio‘ article. It’s also why there isn’t a lot of cardio recommended in Total Six Pack Abs.]

* Our hunter/gatherer bodies are simply not genetically programmed for the abundance of carbohydrate in our modern-day diets.

* Body fat storage is predicated by the hormone insulin.

* Once your muscle glycogen levels are full, any excess glucose will be stored as fat.

* To mobilize body fat (use it for energy) your insulin levels have to drop. Even in a calorie-deficit, your body will be physiologically unable to mobilize body fat if your insulin levels are too high. [note: I think it’s in Good Calories Bad Calories that Taubes gives examples of obese people who are drastically under-eating and not losing any fat].

IMPORTANT: Remember that our intense resistance workouts deplete our bodies of glycogen. This is like draining the storage tanks. We can therefore enjoy a carb-up period (as in MANS) or eat more daily carbs on a lower-glycemic plan (like GLAD).

I’d like to wrap up commenting on these videos by restating something Taubes talked about.

The reason we do science is because we often see that that which appears to be ‘common sense’ is totally wrong. Yes the carbohydrate hypothesis is counter-intuitive and the calorie hypothesis seems like common sense, but it’s right. This also applies to training for muscular hypertrophy and spending as much time as possible in the gym. The more you bust your ass, the bigger you get, right? Definitely not. Like Taubes said, this is biology. When we look at how the human body works, it takes quite a small amount of high-intensity work to stimulate the adaptation we desire, not ‘a lot’ of work (regardless of the intensity). Furthermore, it takes more rest than work to build muscle. Counter-intuitive? You bet, but it’s right!

If you want to stabilize insulin and pack on muscle without adding fat, GLAD or MANS is for you. Both of these strategies have now been used by thousands of people worldwide, many reporting back simultaneous fat loss and muscle gain. See these 2 US soldiers for a GLAD example, and the testimonials page for many MANS examples.

If you want to prioritize fat loss and get RIPPED, opt for Total Six-Pack Abs. Wondering how come you can’t just low-carb your way to 8% body fat?

It’s vitally important to understand that BOTH Taubes and McGuff are talking about taking a person from overweight to a normal weight range. The argument is basically that if you achieve the correct hormonal balance through diet, the body will shed its excess fat, something it stored due to a hormonal IMBALANCE.

In my opinion, it’s a very different story going from obese to normal, and normal to ripped. In short, the OPTIMAL way to do the latter is a COMBINATION of striking the correct hormonal environment AND a calorie-deficit, which is, in essence, the TSPA program.

Again, many have reported simultaneous fat loss and muscle gain, though much more fat loss as you would expect. Mark Webb and Armin are only 2 of the guys reporting this on the Total Six Pack Abs page.

THT is simply the weight training routine that is used in all programs (some slight tweaking in Total Six Pack Abs).

I wrote this article because I thought the 2 videos above summarize well the carbohydrate hypothesis. I hope you found it helpful. 😀