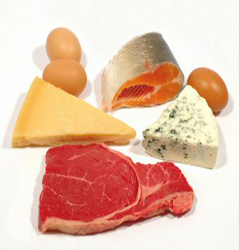 I want to put to rest the belief that fat (especially saturated fat) and dietary cholesterol are bad for us.

I will also show proof that aside from being the best diet for stripping fat, low-carb nutrition actually improves health markers more than a low-fat diet.
Let the games begin…

Where Did All This Nonsense Begin?

Surely if so many people believe something, it must be based on solid evidence right?
Wrong!

If a hypothesis is put forward and believed without being adequately tested, you have a shaky foundation. If this hypothesis is built upon for decades with no further questioning or testing, you have a house of cards. This house is ready to topple, in fact, it should have fell a long time ago.

It all started with a physiologist named Ancel Keys, Ph.D., back in the 1950’s. I’m not going to bash the guy because I feel that although he was mistaken, he was well-meaning. In 1953 he published a paper titled “Atherosclerosis, a Problem in Newer Public Health.” It seems that from here, our dietary fate was sealed.

The implications for dietary fat were dire!

There was, however, one big problem with what became known as the ‘Diet-Heart Hypothesis.’ Data was available for a total of 22 countries, not 7. When ALL the statistics are analyzed, the ‘fat-heart disease’ correlation ceases to exist.

Unfortunately, despite the flawed conclusions of Keys, the media and the American Heart Association jumped on board the diet-heart hypothesis bandwagon.

In the 1970’s Keys bolstered his hypothesis by publishing a study suggesting that saturated fat (from animal sources) leads to high cholesterol which, in turn, leads to heart disease. This is still the conventional wisdom today. Again, out of the 7 countries selected, the correlation between saturated fat and heart disease was not seen but hey, don’t let the truth get in the way of a good story.

Saturated Fat In The Human Diet

Almost all the saturated fat in our diet comes in 3 forms:

Before we get into looking at each acid, let’s discuss the differences between LDL and HDL cholesterol.

Increasing LDL levels while HDL levels remain constant is bad news. The opposite is good news. Raising HDL cholesterol in proportion to LDL is very beneficial for your health. Raising both by equal amounts has no effect.

Now let’s have a little fun 😉
Firstly, it’s well established today that stearic acid has no effect on cholesterol levels. In fact, stearic acid, found in abundance in animal fat, is converted to monounsaturated fat in your liver. This is obviously healthy and raises good cholesterol and therefore lowers risk of heart disease. Hmm, not much wrong there, is there? The result of consumption of this acid is either nil or even beneficial to your health. Let’s move on…

Both Palmitic and Lauric acid raise total cholesterol. This obviously has no real effect with respect to coronary heart disease risk factor.

Now, let’s add the three forms of saturated fat together and see what happens:

Wow! You mean ‘artery-clogging saturated fat‘ doesn’t clog arteries?
Yes, and it’s important to remember that a diet high in fat will also be high in unsaturated fats so the net result of high fat intake, coupled with lower carb intake, is a reduced risk of heart disease.

This is the story of surprised researchers as they see the startling results of studies involving groups consuming low fat/high carb diets Vs groups consuming high fat/low carb diets i.e. more fat loss and improved lipid profiles in the high fat/low carb camp. However, even though the science is staring them in the face, they fall short of recommending it as a way of eating.

The Proof’s In The Low-Fat Pudding

50 years of the ‘diet-heart hypothesis’ and it turns out to be a dud. So many wasted years and so much money wasted on studies trying to prove the unprovable.

Let’s take the latest one for example (as at 7th May 2008). At a cost of $415 million, The Women’s Health Initiative monitored 49,000 subjects over an average period of 8 years – a HUGE study. They were advised to eat more vegetables, fruits and grains and less fat (20% of daily calories – only 44 grams of total fat per day on a 2000 calorie-per-day diet), especially saturated fat.

The results finally came in, the media waited with bated breath – guess what effect this low fat diet had on heart disease……

Here’s a great commentary on the study by the lovely Nina Planck, author of ‘Real Food: What to Eat and Why.’

So If Low-Fat Doesn’t Lower Cholesterol & Prevent Heart Disease, What Does?

I thought you’d never ask. A low carb/high fat does of course. It may seem counter-intuitive but heart disease, a new problem, is not caused by old, traditional foods. It’s caused by newer foods that we have introduced into our diets – carb-laden foods. Let’s have a look at some studies…

Researchers at Duke University Medical Center found that participants who followed a low-carbohydrate diet for six months raised their good cholesterol and lowered their triglycerides (fat in the blood).

Also, the low-carb group lost more weight even though their calories were unrestricted whereas the low-fat group consumed 500 – 1000 calories below their maintenance calorie-requirement.

Could This Be Due To Weight Loss?

Some people may think that the improvements in blood lipid profiles are simply due to the weight-loss and not carb-restriction, not so it seems.

Ronald Krauss at the Children’s Hospital Oakland Research Institute tested this and found that the lipid profiles (cholesterol and triglycerides) improve even when there is no weight loss on a low-carbohydrate diet. You can check the study out for yourself here:
Krauss, Ronald, et al. “Carbohydrate, Weight Loss, and Atherogenic Dyslipidemia.” American Journal of Clinical Nutrition 2006 May;83(5):1025-31.

Dietary Cholesterol May Be Beneficial To Muscle Hackers

The cholesterol in our foods may be beneficial to anyone wanting to build muscle. I personally take in a lot of dietary cholesterol (though I’m not sure what the exact amount is).

3 days a week for 12 weeks, 55 men and women, aged 60-69, (healthy non-smokers able to perform exercise testing and training) performed several exercises, including stretching, stationary bike riding and vigorous weight lifting. The results showed that there was a significant association between dietary cholesterol and change in strength i.e. the higher the cholesterol intake, the more muscle strength gain.

One of the researchers, Steven Riechman, said,

“We were not expecting to get these kind of results,we need further research in this area, but what we found could really make us look differently at cholesterol, especially as it relates to a vigorous workout…Our findings show that the restricting of cholesterol – while in the process of exercising – appears to affect building muscle mass in a negative manner. If it’s true, as our findings suggest, that cholesterol may play a key role in muscle repair, we need to know exactly how that happens.”

So, if you want to keep your heart healthy and build muscle at the same time, you’d better opt for some bacon and eggs in the morning 😉

Now, lest you think I’m just one guy with these opinions on saturated fat and cholesterol, check out the list (not exhaustive) below of professionals who are also in the know:

Just before I leave you, I’d like to show you the alternative food pyramid. You all know the one the government recommends with all the starches at the bottom and fat at the top, well check this out… 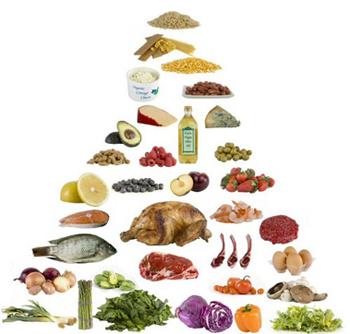 I hope this article has dispelled the saturated fat/cholesterol rubbish for you once and for all. If you’re someone who has problems with cholesterol, you can always try this way of eating and get your blood work done periodically. I’ll be only too happy to receive your email regarding your much improved lipid profile and shrinking waistline!