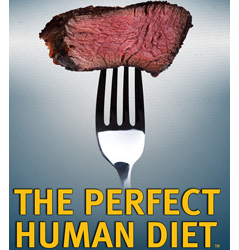 That was the first thing I said after I popped ‘In Search of the Perfect Human Diet‘ into my DVD player.

Yep, producer C.J. Hunt drops dead at the beginning of the film. He had a cardiac arrest during a run at just age 24.

10 days later (and apparently not dead) he is discharged from hospital with the following advice:

This started Hunt’s obsession with diet and nutrition.

He tried it all and settled on being a raw food vegan. But after 5 years on the diet he says,

“My body was crying out for real protein”

He says that at 46 he was fitted with a defibrillator, which would restart his heart if he collapsed again.

“The implant was a physically painful and dispiriting reminder of my mortality that I could see and feel every day. I didn’t know how much time I had left to live, but I was determined to use what time I had to make a difference.”

This started his unprecedented 10-year journey to find the perfect human diet.

The next section of the documentary talks about Kerin O’Dea’s research into a hunter gatherer population in Derby, Australia.

Some of this group had moved to the city had since gotten fat and developed health problems. O’Dea then conducted a 7-week experiment where this group went back to the bush to live their former lifestyles.

The result was that the following problems that they had:

all normalized after just 7 weeks.

They ate mostly animal fats and proteins. Interestingly, in terms of physical activity, the group was LESS physically active in the bush than they were in the city.

There’s a similar story after this about the First Nations people of Canada and the difference between how they eat now and how their elders ate. They are now also suffering the health problems seen above as a result of this dietary change.

The next section is on vegetarianism and veganism. You know the story: beef is bad, soy is good. Yeah right!

An interview with a vegan has her tell us that we humans are herbivores! Dr. Michael Eades says in his interview that this is absurd. We have a carnivorous GI tract. Furthermore, vitamin B12, which is only found in food of animal origin, is essential to us. So our natural state is NOT vegetarian at all.

The first diet program as such was the Banting diet in 1863. William Banting was a formerly obese English undertaker who cured his obesity problem with a weight loss diet based on limiting intake of refined and easily digestible carbohydrates. Meat and green vegetables were the staples.

Gary Taubes says that up to the 1950’s this was still the accepted and common way to lose weight. It was common that if you went to a doctor to be treated for obesity, you were advised to restrict carbohydrates.

Dr. Weil agrees and says that fat does not make you fat. What’s driving the obesity epidemic is the excessive consumption of high glycemic carbs.

Nowadays a low-carb approach is not the prescription for obesity, which begs the question – why did things change?

The first set of government nutritional guidelines were written by political staffers, not scientists or nutritionists. They were based on a STILL unproven theory that dietary fat is responsible for heart disease (see my article on this here). These recommendations have, unfortunately, been remarkably consistent ever since.

2 million years ago saw the first appearance of homo erectus. They were very anatomically similar to us from the neck down. And all the evidence says they ate a diet very high in animal foods.

We ate this type of diet to develop the brains, health, and strength to become the dominant species.

Particularly interesting in this movie was the visit to the Max Planck institute in Germany to talk about stable isotope analysis of bone collagen to determine human and animal diets (and dietary changes) in prehistoric and historic Europe.

Whereas finding tools to kill and cut up animals points to a high meat diet, it doesn’t necessarily prove it. That’s why this type of bone analysis is particularly revealing.

Professor Mike Richards from the institute states that neanderthals got all of their protein from animal sources. “And then we see the same thing with more modern humans as well…but a larger range of animal proteins including more fish.”

This is illustrated on a (American) football field as the half yard line. Up to this half yard line everyone ate wild animal and plant food. From this tiny sliver of time up to now, refined sugars, refined wheat, refined oils comprise about 70% of the calories in the average American diet. We really can’t be surprised that we have problems, can we?

However, these “processed” foods didn’t really get going until the 1900’s, which is the 0.001 yard line on a football pitch! This illustrates that we are now WAY off base when it comes to what we are genetically programmed to eat.

We can say with certainty that it is a high carb-diet that is truly the fad diet (something popular in the short term). A lower carb, higher protein and fat diet IS simply the real HUMAN diet. If it’s a fad diet, it’s a 2 million year old fad.

It can be clearly seen from this section of the film than wherever and whenever grains and plant foods became our species’ major source of protein, our health declined.

Professor Mike Richards from the Max Planck Institute says “Animal proteins and fats are irreplaceable in an optimal human diet”.

The next section was a treat and something I didn’t expect. It’s something that is normally left out of films like this: How to shop for this type of diet.

Here are some tips from the film.

Get larger cuts of meat including:

Vegetables. If you haven’t got time for fresh vegetables, frozen is much better than canned, so…

Romaine Lettuce is better for you than iceberg

Snack on nuts as well as fruit including walnuts, pecans, and almonds.

Hunt finishes by saying that because of his heart condition he made a choice 5 years ago to adopt a higher animal protein and fat diet while reducing his carb intake. His doctors have said that his blood work proves that this was the right decision.

I loved this film. Where I see big potential for it is in helping others see the truth about optimum human nutrition. If you have people in your life who just won’t listen to the truth about controlling carbohydrate and eating more natural fats, don’t spend ages debating with them, give them this DVD. 😀

To see why this diet is good for your muscular development also, check out my MANS diet.

P.S. Filmmaker CJ Hunt has been in touch and said that the DVD no longer ships internationally. However, you CAN get the film on iTunes in Ireland, UK, AU, NZ, Canada and USA; search “THE PERFECT HUMAN DIET”. Also, international viewers may find it on Amazon Instant Video, GooglePlay or SonyPlayStation. USA and Canada are also on cable systems.