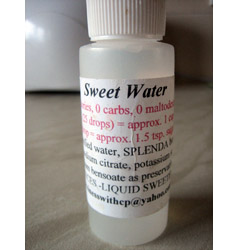 Good. I have been using liquid splenda (or liquid sucralose) for 3 months or so now and I really like it.

I’m playing the waiting game for Truvia right now, but in the meantime I went looking for a zero-calorie sweetener that was considered safe. That’s when I found liquid splenda. I use it in my coffee, my low carb pancakes, my hot cereal recipe from Total Six Pack Abs, my protein bar recipes to name but a few.

Regular granulated splenda from the stores does contain carbs; about 0.5 grams per teaspoon. Liquid sucralose contains no calories or carbs whatsoever.

So where can you get liquid splenda? The only place I know is ebay.

The guy selling it is based in the states but don’t let that put you off if you don’t live there, he delivers pretty fast, about 1 week to the UK. It also lasts forever! As I stated, I have been using it for about 3 months now and haven’t even used 1/5th of a 2 ounce bottle.

I think it’s very good value for money! It’s called ‘Sweet Water’ on there, check it out.