How Did This 40+ Guy Get A Youthful Six-Pack? 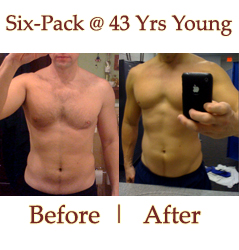 If you think it’s too late to get ripped at 40+ years of age, you’re wrong. STOP selling yourself short!

This post will be VERY encouraging to guys and girls who fit into this category, and motivational for everyone else.

One of the biggest surprises I had when I started this site was the sheer number of guys over 40 (sometimes over 60) who contacted me for advice.

Their number one concern?

Okay. Firstly, being in your 40’s is NOT old. I’m personally planning on living for over 100 years (and that’s not a joke).

Secondly, the biochemical changes that result in muscle growth are the same in a 50 year old as they are in an 18 year old. The stimulus required to induce growth is also the same. Fat loss is the SAME process for everyone too.

Is it possible that growth and fat loss may occur at a slower rate because of your age? Yes, but so what. It’s like that Chinese proverb I quoted in a previous article,

“If we are facing in the right direction, all we have to do is keep on walking”

We all want to grow faster. We all want to lose fat faster. But so long as we are building/losing at all, we just have to ‘KEEP ON WALKING‘ and we will get to where we want to go.

Fortunately, however, ‘Total Six Pack Abs‘ uses 1.5lbs of fat loss per week as the MINIMUM target; so this system will get you there as fast as you’re going to get there.

Okay, enough from me. Here’s the very first correspondence I received from Chris Wolf after his purchase of ‘Total Six Pack Abs’.

“I’m the 43 year old guy who wrote you a few months ago about my concern that your program wouldn’t work for a guy my age in removing mid-section fat, because I was already in pretty good shape, exercised regularly and ate a high-protein diet. Well, it’s working and I can hardly wait to go work out at the YMCA to see the progress in the mirror. Thanks for helping me to get over the hump to try your book.

And by the way, you really need to warn people that this program is going to cost them a lot of money because they will need a new wardrobe. Not only can I see definition in my abs for the first time in my life, but my butt has shrunk too and I’m walking around in baggy pants. Thanks a lot!”

Some ‘before’ pics of Chris… 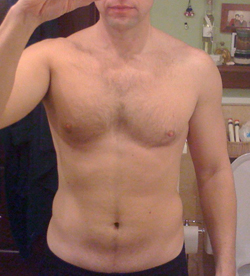 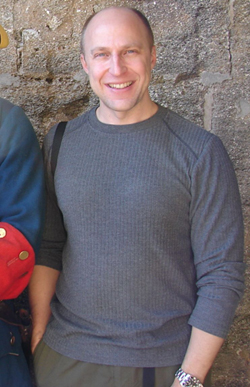 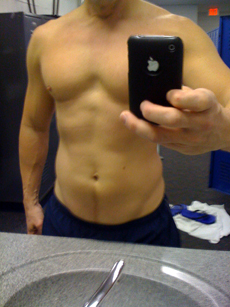 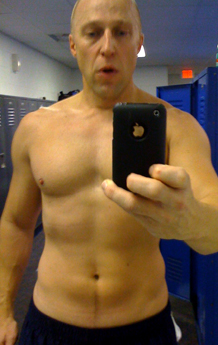 A little later he followed up with the following..

“I’m still not where I want to be, but I daresay my 43 year old body looks
pretty good thanks to the MuscleHack diet and exercise. Still walking around
in baggy pants though.”

“Though I’d like to have followed, and still hope to follow, your program with more discipline of weighing and being scientific, I had great success just focusing on the food choices (your recipes) and subbing those out for bread, starches, etc. My hope would be that this testimonial might help people get over the initial hump of “this is too hard; I won’t have success unless I follow his program to the letter.”

So Chris had great results without even following the program to the letter! He used the training system and simply ate WITHIN the acceptable foods list for both low-carb and high-carb portions. Although this isn’t a bad way to start the program if you’ve never done anything like this before, a more scientific approach would have yielded even better results.

Another thing I’d like to mention is Chris’ obvious muscular development.

His shoulders, arms, and especially pecs have certainly grown. His new lower body fat percentage then adds to the more defined look. This is yet another example of someone that has shattered the myth that it’s impossible to build muscle and lose fat simultaneously. It’s TOTALLY possible if you eat and train in a certain way.

For other guys & girls that fit into this age group: STOP putting off the decision to look great! Start to vividly imagine how your body will look if you make that affirmative decision today. Realize that it will have positive knock-on effects on all other areas of your life…

If you decide NOT to make this decision, you’ll end up back at this point in 1 year, 5 years, or 10 years time wondering if you are too old. Wishing you had have gotten serious the first time around. Heck, you’d already have been reaping the rewards for years if you had just gone for it.

Remember that all you power lies in one moment only: NOW! The past and future don’t objectively exist, they are mental projections. ‘Now’ is the only moment we ever actually experience; realize this and seize it!

I want to thank Chris for getting in touch with me and submitting his testimonial. As with the rest of the MuscleHack Testimonials, this was totally unsolicited i.e. I did not ask for this review. People, of their own accord, come back to me because they are so excited about their results. And I really appreciate it!

Well done, Chris. I’m sure you are an inspiration to many!