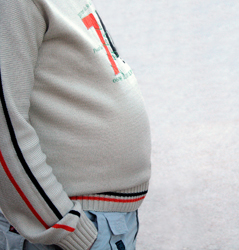 Are fat-loss stalls inevitable when cutting?

The short answer is NO.

The long answer is still NO, but only if you take a scientific, methodical approach to your cutting cycle.

Actually, not only should your fat loss not stop, BUT, it should APPEAR to speed up – more on this later.

Guys, you absolutely CAN keep losing fat week on week until you reach your goal of chiseled abs. It’s actually rather simple to do, but that doesn’t always mean it’s going to be easy, especially at the tail-end of the cycle. It’s when the going gets tough that the quitters quit, and the strong-willed march on to victory.

So, how do you take a scientific approach?

Firstly, you need to know EXACTLY how many grams of protein, carbs, fat and total calories you are consuming per day. So many people are taking a haphazard approach to cutting i.e. they simply ‘cut down’ on food intake and start adding in cardio. This is a terrible strategy!

When these people stall (and they inevitably do), they panic and further cut back on food intake. They’ll lose fat for another few days or a week and stall once again.

At this point they either quit, or crank up their cardio to INSANE, unnecessary, MUSCLE-WASTING proportions. This actually proves counter-productive. Their body slows its metabolism and from this point on, any fat loss is accompanied by a corresponding muscle loss. YIKES!

If they hadn’t quit by this point, they do now! And understandably so!

The first and most critical step here is to know your EXACT dietary intake when first embarking upon the cut. It is only through doing this that you can know with CERTAINTY what needs to change if and when fat loss slows.

On the exercise side, everyone should keep lifting and seeking progression in their workouts. However, your cut should NOT begin with a lot of cardio. I actually recommend new ‘cutters’ to perform NO cardio in their first week. On the 2nd or 3rd week they can start with 1 or 2 short 10-minute sessions at most.

Why? You WILL lose fat without it. The calorie deficit through diet and lifting is enough on its own.

I always tell people, “You need to have somewhere to go” when cutting. What I mean by this is that you CANNOT just go all-out from the get-go. Your cutting strategy needs to start off quite mild and actually INCREASE in intensity as time passes.

Imagine if you cut 1000 calories from your diet and perform 3 x hour long cardio sessions per week.

The body wants to keep you alive. It sees the above as a signal to SLOW your metabolism and PRESERVE energy. When your fat loss stalls in 2 or 3 weeks, where can you go from here?

You’re stuck in a rut and there’s no SENSIBLE way out! 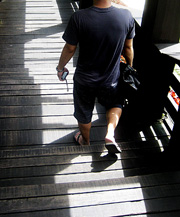 When I’m trying to explain this to people I often tell them to visualize a staircase.

When you start your cut, you’re standing at the top. Each step down is a drop in body fat until you reach your goal body fat percentage, which is the floor.

The point is this: you MUST take one step at a time. A step could be…

Taking just one step at at time will produce ongoing fat loss. As progress slows you once again take another step down. Before long you’ll be at your goal body fat percentage and have a nice shiny six-pack to show for your efforts. 😀

Taking too many steps at once GUARANTEES that you’ll stall hard and end up running back to the top of that staircase ASAP. Being ‘too keen’ is a sure-fire way to ensure that you’ll never get that elusive six-pack.

Hey Mark, what’s all this about fat loss ‘appearing’ to speed up?

Well, as you approach and cross the 10% body fat mark (17% for women), fat loss DOES in fact appear to increase.

This is simply because a 1 pound fat loss will produce a more NOTICEABLE difference on a lean guy than a heavier one.

If a guy at 9% body fat loses 1 pound of fat he’ll notice quite a big difference in definition. His abs, chest, arms, thighs etc. will all appear more cut.

A guy at 20% losing 1 pound of fat will likely not notice much in the mirror but can rely on tape measurements and how his clothes fit. But so what! The point is, if you’re losing fat you’re getting closer to your goal EVERY SINGLE DAY! Take only step down that staircase at a time and you’ll get to where you want to go.

Guys, getting a six-pack is actually a MATHEMATICAL CERTAINTY when you do it right. As I say in the Total Six Pack Abs page….

….Your body actually WANTS to give up its fat stores?

Yeah I know, it may not seem that way sometimes but it’s TRUE.

THINK ABOUT IT…the only reason the body stores fat in the first place is to be USED AT A LATER DATE.

The problem is that the vast majority of people eat in a way that sends the WRONG HORMONAL SIGNALS to the fat cells; their bodies stay in fat-storage mode as they try desperately to run further, eat less, take fat-burning pills….uurrrgh! Enough of this!

You get it? Your body WANTS to give it up, you just have to work WITH it.

Taking more than one step at a time sends the WRONG signal, a threat to your survival if you will. Your body will counter this threat by slowing fat loss to a minimum.

Be Smart – one step at a time and your success is a 100% CERTAINTY!