From Moobs To Musclebound – A MuscleHack Transformation 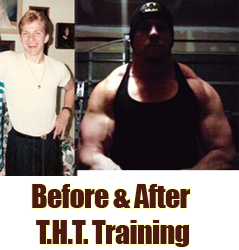 If you’re part of our MuscleHack community on facebook, you’ll more than likely recognize this particular beast.

He’s the “Traps from Texas”, Sean Alexander Brown. A 37 year old guy from Corinth, TX -this is his facebook profile.

Sean wants to share his MuscleHack journey and how he put on considerable muscle mass AND got his six-pack after finding this site and finally discovering how to REALLY build muscle and burn fat once and for all.

Growing up, I was always the small fry of the bunch. I was the 4th out of 5 children and the middle out of the boys. Being the smallest boy, I was pretty much picked on and led a pretty solitary life all the way through high school. I always wanted to bulk up and even hit the weights, but I seemed to never get anywhere, even through my high school years.

When I graduated, I was only about 5’6” and roughly 115 pounds. I had the pigeon-chest and buggy-whip arms to prove it. You could forget about getting a date, especially if you weighed as much as a cheerleader.

See what I mean……taken after my graduation. =>

Realizing I was not going to go through life looking like a kid, I tried for years and years to “bulk-up” eating what I can, hitting the weights hard and doing what the bodybuilding magazines said I should be doing. Years went by, I finally landed a girlfriend, got married, had children…just living the good life, so I thought.

Everyday I still saw myself as that scrawny little turd-ball. So I hit it hard, using 4-6 reps of heavy weight on everything, 30 minutes of cardio everyday, not caring what I ate, just bulk up and GROW…and I did.

I gained myself a nice little 36 inch waist, but I could bench a bunch! Power baby!!

When I reached my mid-thirties, my kids were old enough to start going to the local water park where I live, so I decided it was a nice time to go there especially on a hot summer day in Texas. I packed the cooler, went to the park, took off the shirt, and was snickered at by a couple of teenagers….

“Ya he does, I didn’t think he’d look like that…he looks muscular, until he took off the shirt.”

Upon hearing that, I put my shirt back on and went swimming with it on, not caring about the tan line whatsoever. Ego was bruised…BIGTIME.

I asked my son and his mother Jackie if they thought I was fat. My son said “yep”. Jackie said,

“You are putting on the pounds, but that’s what you wanted, right? You can’t be big without gaining weight. Short stocky guys like you will never have a six pack unless you take steroids and do drastic cutting.”

That’s when I realized that yep, I could horse around some serious weight, but I look like a fat man when I take off my shirt. I didn’t know how to diet. I defeated my intentions. I went from being scrawny to looking like a pork chop.

About a year or so ago, I was looking at one of my favorite bodybuilders Jeff Willet when I came across an interview that a gentleman named Mark McManus did with him. I read through it, seeing what I could do to lose this gut and get better definition. At the end of the article, it gave a little description about Mark and his website MuscleHack.com. With my interest peaked, I went straight to the website and soaked in all the information I could.

To the right, I saw an ebook called Targeted Hypertrophy Training. I clicked it, read it, and realized I have been training the wrong way for over 20 years!!

With a renewed sense of vigor, I busted my butt…training THT-style. I became part of the Facebook group and I was seeing how others were reaching their goals. I even became friends with a few and started calling them “M-Hackers”.

By the time I was done with all the THT Cycles, I dropped down from and almost 37 inch waist down to a 34. I was new to dieting, so I didn’t know quite how to manage it, but still stayed strong and avoided the high sugar sodas and heart-clogging hot dogs.

I used the 7-10 rep philosophy that was in the book because I was afraid to go too light. I made improvements, but to me, it still needed fine tuning. I wanted to be a little bigger, but not fat. I needed more information; I needed to be lean and look jacked.

Looking for some more information, I decided to but my faith into Mark’s work 100% and buy the Total Six-Pack Abs book. Was I ever amazed at the hard work he put forth to make this book!! It broke down my training and diet, how many calories it took, protein, carbs, fat, the whole enchilada!

My son started seeing the results from my new found fitness kick. I was catching him during tag and keeping up with him. My littlest daughter and I would literally play for hours outside and have a good time without being worn out.

The funniest thing happened when I went to the water park this time. When I took my shirt off, Jackie’s oldest daughter told me to please put my shirt back on. I asked why? She said,

“All my girl-friends are checking you out…along with their Moms!!!” I busted out laughing and then went on to play with my little girl. In my mind though that moment was one of the best feelings ever! 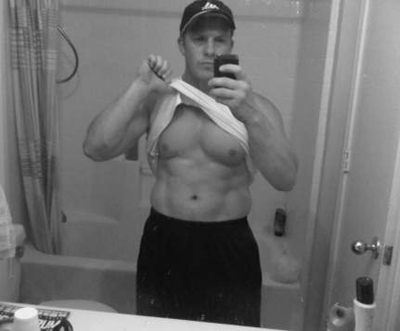 With the summer here in Texas lasting well into October, I tried TSPA for a second time and still maintained the proper ratio of calories and managed to add even more muscle even while burning fat all over the place. 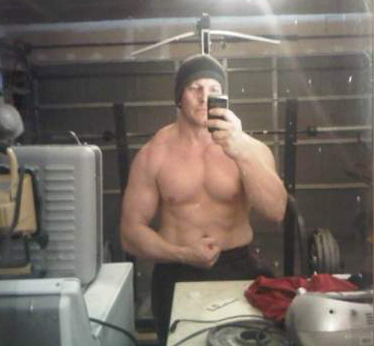 My second time on TSPA, my size 34 shorts were falling off of me this time, as I got down to a 32.5. Now that’s progress!

Now with the fall and winter here, I finished out my TSPA routine and proceeded on to the new THT 5. I wanted to add a little more size to my shoulders and legs. Following the proper carb/pro/fat ratios, I started busting it hard in my dungeon again, putting on a good amount of quality muscle, while staying relatively lean, and not going back to the way I was before (Mr. Moobs). 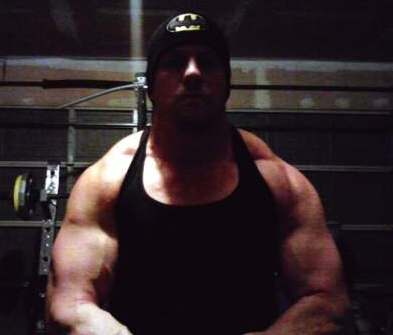 This is me at 37 years old.Very happy with the way I am looking now.

Now that 2013 is here I have a new focus and new goals. I want to get my fellow friends, co-workers, and even complete strangers to realize that getting into YOUR best shape is a lot easier than you would think. You don’t need expensive gadgets, worthless pre-workout supplements, or DVDs that have loudmouth coaches yelling at you while doing ridiculous exercises that could hurt you.

All you need is a gym membership, or an open room or garage, free weights with a good power rack and cable, MuscleHack.com, and your desire to succeed and reach your goals. Don’t make the same mistake I did for twenty years. Learn how to build muscle and look good the right way.

I’m looking a feeling a whole lot better now than I ever did in my twenties. As I always say…Keep on M-Hacking peeps!!!

Mark says – don’t go along with the herd mentality. Building muscle is a predictable event when you know what you’re doing! You SHOULD be succeeding at this game. And you CAN get lean and STAY that way. There’s no need to get fat when adding muscle.

Don’t know about you guys, but I’m in the mood to train after that!