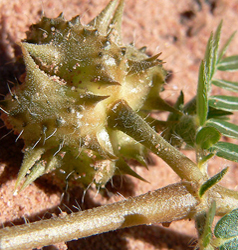 I’ve been asked a few times by readers about a particular ‘testosterone booster’.

They’ll say, “Does Tribulus work?“, “What’s the best tribulus supplement?“, “Are there any side effects of tribulus?“.

In order to find out we need to turn away from the manufacturer’s claims and turn to any available research.

Here’s some of the claims:

There are other claims, but I’m looking at it from the perspective of a Muscle Hacker only.

So what do the studies say about its effects? Let’s take a look at 2 studies I have found that have relevance for us…

They studied the effect of tribulus terrestris on strength and fat free mass over 5 weeks of preseason training in elite rugby league players.

22 Australian elite male rugby league players were match-paired and randomly assigned in a double-blind manner to either a tribulus terrestris or placebo group. All subjects performed structured heavy resistance training as part of the club’s preseason preparations. They were given 450mg of T.T. daily.

After 5 weeks of training, strength and fat free mass increased significantly without any between-group differences. So the addition of Tribulus terrestris didn’t do anything above what training alone can do.

The researchers concluded…”It was concluded that T. terrestris did not produce the large gains in strength or lean muscle mass that many manufacturers claim can be experienced within 5-28 days.”

Let’s hammer the point home. Here’s another one…

They wanted to studyTribulus terrestris’ effects on body composition and exercise performance in resistance-trained males. Fifteen subjects were randomly assigned to a placebo or tribulus (3.21 mg per kg body weight daily) group.

After 8 weeks they found that there were no changes in body weight, body fat percentage, total body water, dietary intake, or mood states in either group.

Actually, muscle endurance (measured by the max. no. of repetitions at 100-200% of body weight) increased for the bench and leg press exercises in the PLACEBO group! I thought that was pretty cool. 🙂

The researchers concluded, “Supplementation with tribulus does not enhance body composition or exercise performance in resistance-trained males.” It sure doesn’t.

So to answer your questions…

What’s the best tribulus supplement? There aren’t any.

Are there any side effects? Considering that there aren’t any EFFECTS period, I wouldn’t be overly concerned about SIDE effects. 😉

If you’re interested, these are the bodybuilding supplements I DO recommend. And I reveal what I believe to be the best whey protein supplements here.

Thanks for taking the time to read my stuff. As always, I appreciate it!