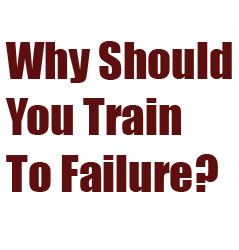 Training to positive failure is always a cantankerous issue, but it really shouldn’t be.

By positive failure I simply mean:

That point in a set when you can no longer perform another full positive portion of the rep unassisted (and in the prescribed form).

At that point, you set the bar down. Simple.

I’ve stated numerous times why this is the best way to train when targeting muscle growth. But I recently contacted some other heads in the industry for their take on training to failure.

I asked them to answer one simple question…Why Train To Failure?

Here are the responses.

Intensity is the one and only factor in your workout that stimulates your muscles to get bigger and stronger. The higher the intensity on each set you do, the better your results will be.

Your goal on every set is to reach 100% intensity, the highest possible level, which means training to failure. The last rep you perform in each set you do should be the last rep you can possibly perform with proper form.

Look at it this way: let’s say you can perform 10 reps in the barbell curl with 95 pounds with good form, and no matter how hard you try, you can’t complete an 11th rep. That would be called a set of 10 reps to failure.

Which rep of that set would you say is the most PRODUCTIVE in terms of increasing your muscular size and strength—the first rep (the easiest), or the last rep (the hardest)? You have to admit, the last, hardest rep is the most productive.

Now what if you didn’t do that rep? If you stop that set at anything less than 10 reps, you never do what we just agreed is the most productive rep of the set—NO MATTER HOW MANY SETS YOU DO. 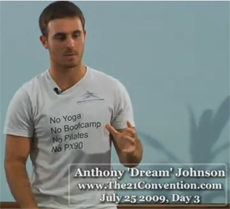 Anthony ‘Dream’ Johnson is the CEO, founder, and architect of The 21 Convention. He blogs at ‘The Dream Lounge‘.

My answer to this question, why train to (positive) failure, boils down to two fundamental, complimentary points.

A) It is the best, and most reliable incidental point to end a set with common exercise equipment. Positive failure is a stopping point that can be applied equally to a rusty barbell, as it can selectorized machines, body weight only exercises, and so on.

It is worth mentioning however that this is less true with adaptive-resistance exercise (ARX) equipment. With primitive equipment and exercises, positive failure exists as a binary that the trainee can push forward or allow to creep back, depending on a variety of factors.

On equipment that adapts to the user’s muscular demands when in motion, “failure” of any kind becomes more complex because it then exists on a scale. The user is now in full control, not 50/50 with gravity.

In fewer words : with specific equipment, what was a stationary target that could only be nudged, becomes a fully moving target to be hit at the user’s discretion.

B) Training to failure is a simple, yet extremely personal way to confront and cultivate the best and highest within one’s self.

You can fool others, but you can’t fool your self. In this context that means : depth of muscular and metabolic fatigue, mental focus, given effort in the context of maximum available effort, and so on.

Exercise to this depth of effort and discomfort is a self-esteem and self-confidence building tool, because it requires a degree of mastery over one’s self in a demanding situation (physically, and as the experience is processed psychologically on a basic level).

While this is not a primary of exercise, I am convinced it fits appropriately in an exercise context, independent of individual goals, history, environment, and other areas of life.

Exercise to “failure” I think, is thoroughly – and for a normal, healthy human being – universally therapeutic, and has positive effects outside of the immediately obvious, including on the level of human psychology. 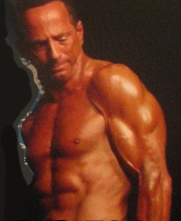 David Landau can be found at Exercise Fraud

In the last 40 years, the idea of H.I.T. Training has revolutionized physical training in terms of efficiency and structure. “Training to Failure” was the “vanguard” behind which the H.I.T. approach stood. Its originator Arthur Jones was himself a “one hundred percenter” and that was in every venture Jones himself pursued. So therefore we have the base of understanding in the Foundation itself.

The originator Arthur Jones never did anything “half-assed”. “Training to Failure” was then the underlying idea behind the principles of Nautilus Training as prescribed by the genius of Jones. The key to understanding this principle is that it was originally meant for the millions who followed or participated in Nautilus Training and the like. For those who were the leading practitioners, they needed to further understand its meaning.

As Arthur once said, “Don’t believe me because I said it or anyone else said it, apply it to your own life.”

So the idea behind “training to failure” is simply this – train as hard and diligently as “you” can and use this idea in the advancement of your physical well-being.

I want to add my voice with regards the counter-argument that is often put across: ‘Total Volume‘. This is the idea that the total amount of work done is more important than the intensity of effort.

Here’s why I think Total Volume is “Totally” wrong. Let’s look at an example…

Let’s say I can do 10 reps to failure on a bench press. If I was a believer in Total Volume, I could stop at rep 7 knowing that I’ll perform another 7 reps after a minute’s rest or so. If I do 10 sets, that’s 70 total reps at whatever weight I was using.

Contrast this to the guy that goes to failure. Let’s say he’s a THT guy. He does 6 sets and fails on the 10th rep every time. That’s 60 reps with the same weight.

The first point I’d make is that we are dealing with BIOLOGY here, not mathematics. The body isn’t “counting” the number of reps you do.

What the body responds to isn’t some mathematical number, but a STRESS of sufficiently high enough intensity to warrant an adaptive response. If it’s not there, there will be no adaptation/overcompensation, no matter how many sets you do.

It’s a simple matter of the body adapting to its environment. It’s real. It happens. But only if the requisite environmental “trigger” is there.

I was discussing this with a fellow trainer recently and made the above point on intensity and adaptation, and then said…

“Or why not do 1 rep, put the bar down, have a chat or whatever. And just make sure you do that 70 times, because it’s the total number that matters, not intensity.”

“Yeah but Mark, no-one is recommending training to just 10% or 50% in every set.

“Ah, exactly. It’s too easy. It’s not taxing enough, or you might even say, it’s not intense enough. Don’t you see you’ve just conceded the point? You’ve just implicitly stated that there is indeed something about the intensity of effort. If this were not so, those low-intensity sets would stimulate an equal amount of growth because it’s all just down to the math at the end of the day”.

Again, this is a biological matter, not a mathematical one. The body’s existing capacity must be stressed in order to trigger the desired adaptive response i.e. the body increasing its existing capacity by building more muscle mass.

How would you know for sure? Well…you can’t. I would say that there are those quite rare individuals who are born with superior genetics for building muscle who can indeed stimulate growth with less than 100% training. However, must of us aren’t that lucky. But here’s the important point…

The only way you can get rid of this uncertainty and be sure that you did enough to stimulate growth is to go to 100%. By doing so, you go past any possible break-over point, whether it was 83% or 92%. This is training with confidence.

Mike Mentzer made the point best I think in one of his seminars. Watch from 2 minutes 35 seconds where he begins with, “A few individuals have raised the intelligent question…”

You wouldn’t believe how many people have come to me and told me that they only started getting results after YEARS of wasted effort when they cranked up the intensity.

In fact, on the issue of environment, stress, and adaptation, I would urge you to watch this Mike Mentzer video as well. While you’re there, read the comments below for more examples of people who only started to grow after employing high intensity theory.

Final Point. Think about it: You’ve absolutely nothing to loss, and everything to gain (literally) by starting to train to failure. How many more years are you going to waste with sub-maximal workouts?

If you are not a THT guy, download the free workout and get started today. I bet that in just 7 days from now, you’ll visibly see that you’ve made the right choice and you’ll never train another way again. Or at least look into other High Intensity Training programs. You won’t regret it.