The Week From Hell 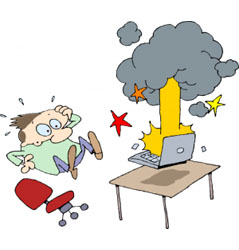 Short post here just to give you guys an update of what’s going on in my world.

It’s 3 days ’til Christmas and I’ve had the WORST week ever!

Yes. My crappy Dell laptop wouldn’t start up so I had to try and repair it somehow. The usual Windows repair disk didn’t work either.

I decided to try Dell’s “wonderful” Datasafe option that was appearing after bootup.

What it does is backup your hard drive, then formats it, and then puts all your stuff back. It didn’t work out exactly as planned, folks. Somewhere along the way it crashed during the process. Nightmare.

What I had to end up doing was installing Windows 7 from scratch on a formatted drive. Everything’s gone. Everything. The original word documents for all my books, all my workout logs, my book-keeping files, my pictures, testimonials, all my programs…everything!

The most disappointing part was that all of the work and research done in 2011 for the new membership site is also gone.

I bought a recovery tool and it was able to find some word and txt files. But the ones with the most work in them are totally gone. About 2 or 3 smaller files are there, but when I try to restore them, they’re corrupted (both Word and .txt files).

Any ideas on how to repair corrupted Word or .txt files? Not that it really matters because these files don’t contain the real meat of the research.

And yes, the MuscleHack Chow book is gone too. I can’t even think about re-writing it all again right now.

However, I will release the free calorie and protein calculator that was to come with the book. The guy that designed it for me will have a copy on his hard drive. 🙂

Oh yeah, and I almost broke my arms squatting!   😯  The bar rolled off my back (totally my fault) and bent my arms way back. Ouch! The bar fell hard on my safety pins and bent them out of shape. So I gotta order new ones.

After saying all this, I’m actually UPBEAT today 😀  No joke!

This is a challenge. And a challenge always brings opportunities for growth.

I’ve bought an external hard drive for backups, and my computer is a lot more organized now. I’ve bought antivirus & spyware software, too. I also got a foam barbell pad for squatting.

Starting to work on the membership site from scratch will be a pain to begin with, but it’s an opportunity to make it even better than it was!

It won’t be ready for January 2012, guys. There’s just no way I could get that much work done that fast. Remember, even the research and references to studies are gone. It has to start from the very beginning again.

I’ll probably start blogging again in January. I’d love to have the membership site ready for February, but I can’t make any promises. For those who don’t yet know, this member’s only site focuses on simultaneous fat loss and muscle gain (yes it’s possible). It will also contain Advanced THT Training for the fastest strength and size progressions you’ve ever had!

After such a downer, there’s only one way to go. It’s all good from here on in! Plus I’ve learned some valuable lessons.

Like I say in this post, the path of least resistance is the path of pain. Learning the lessons, figuring out what needs to be done and starting the rebuilding process is where the opportunity is, so that’s all I’m focusing on now.