The Ultimate Warrior Agrees With Me 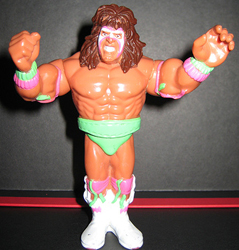 So it turns out the Ultimate Warrior agrees with me.

Yep! I was a huge Warrior fan as a kid. I just loved all things WWF (as it was called at the time). So I’m pleased to learn that he is in agreement with me.

I know you’re wondering, “What the hell is he talking about?”.

I’m watching some YouTube vids and, as normal, I ended up clicking on some related videos. 10 minutes later I’m watching a documentary on the Ultimate Warrior.

After it was over, I found the Warrior’s own YouTube channel, which I hadn’t been aware of.

After watching a few of his vids, I came across the following. (Watch it and try to spot which comment I found myself nodding my head to)

Did you catch it?

HIT proponents will do 1 set to failure, which takes care of the intensity aspect. High Volume proponets think they’ll “grow a third eyeball or a hair on their tongue” if they work to failure (the words of Mike Mentzer). So they avoid failure like the plague, but do a very high number of sets.

Now, if I had to pick either one, I’d pick HIT. 1 set to failure does stimulate increases in strength and size. And indeed, there is a cycle of THT training that does exactly that.

But if it could be demonstrated that more growth could be stimulated with multiple sets, why not also perform cycles where multiple sets to failure are utilised, but a longer break between same-muscle-group-workouts is employed?

This meta-analysis [1] concluded that multiple sets will produce more growth. Specifically, that 4-6 sets can result in a 40% greater hypertrophy. The THT volume cycle entails an average of 6 sets to failure for each body part.

But what is CRUCIAL to understand is that there is a limit to how much growth can be stimualted in any single workout.

A very high volume routine simply puts you into recovery for too long. Since you don’t overcompensate (grow) until you finish compensating (recovering), all that extra work you thought was necessary was actually counterproductive.

Other systems take the “Total Volume” approach and see reaching positive failure as some sort of disaster. So if you can do 10 reps to failure of a given weight, it’s best to stop at 8 for some reason that I can’t quite get my head around.

Oh yeah, apparently you can do more volume with this method. I disagree with that by the way. But anyway, the goal of T.V. is to increase the Total Volume with each successive workout to ensure growth. I don’t think so. As Arthur Jones used to put it, “You can’t make up for a lack of intensity with extra volume”.

So, as the Ultimate Warrior states: go to failure. But recognise that there is a limit and stop around 6 sets.

On the other hand, you can do 1 set to failure, but train each body part more frequently. These are the Volume and HIT cycles of THT Training respectively. If you haven’t already downloaded these workouts, do so at the top-right of this page (by entering your email) and start progressing and growing once and for all.

As a sidenote, yes you should take longer breaks between sets than most people do. Working to failure is fatiguing and requires 2-3 minutes rest between sets. This is optimal. Another training program that I have long respected is MAX-OT, which hits the nail on the head in terms of rest, number of sets per body part, and working to positive failure.

Now, please don’t take this as an endorsement of Warrior’s training tips. The only part of this video I liked was that one sentence. For example, I’m not sure what “working the muscle from the inside out” means. I’m assuming that he means that with the higher reps to failure, you feel a deep burn. However, let me just clarify that this isn’t working a muscle from the “inside out” any more than 5,6,7, or 8 reps to failure would.

It’s just that at higher reps the body’s energy requirements are going to be produced largely by the lactate system, which has the byproduct of producing lactic acid, hence you ‘feel the burn’.

Now to finish, here’s a funny clip of some of Warrior’s promos from yesteryear. I loved trying to figure out what this guy was saying 😀