The Sunshine Vitamin That Can Save Your Life & Boost Your Performance 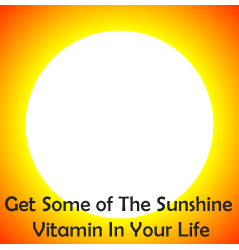 I’ve been taking the “Sunshine Vitamin” for over a year now. It’s cheap, effective, and you should be including it in your daily supplementation schedule A.S.A.P.

In fact, as you’ll soon see, it’s really more of a hormone than a vitamin.

I’m going to show you some videos today of doctors talking about the beneficial effects of Vitamin D on everything from flu to cancer, and even athletic performance!

The unfortunate fact is that most of you are probably deficient in this vitamin at least during some part of the year.

I’ll talk about dosage at the bottom of the article.

First up, check out Dr. Prendergast talking about the positive effects on flu (including bird flu), asthma, and cancer. At around 3mins 45 secs he says, “16 major cancers would all be diminished by 90% by supplementing with vitamin D.”

Dr. John Cannell here talks about how people on more than 5000 IU (international units) of Vitamin D per day don’t get sick. That’s been my experience so far too. 😀

As you heard from Dr. Cannell above and also from this page on Dr. Mercola’s website, the recommended dosage is about 5000 IU per day.

You won’t need this supplement at all if you live somewhere where it’s sunny all year round. And if you only get good summers, you won’t need it during those months. However, if you’re summers aren’t great, it may be a good idea to take it year-round.

Don’t buy anything until you read this: You specifically need to buy Vitamin D3 as Cholecalciferol capsules.

This is the brand and strength I take: Healthy Origins Vitamin D3. You get 360 capsules for $27, which is less than 30 bucks for a whole year’s supply!

I searched MyProtein UK and was surprised to see that they stock it too here (is there anything they don’t sell?). They only sell 2500 IU capsules, but it’s a very cheap way to start supplementing and see what you think – £7.99. At their website they also say, “There is also some evidence to suggest Vitamin D levels are associated with the maintenance of power and strength by potentially increasing the size and number of fast twitch fibres.” I don’t know where they got that from to be honest but it’s worth bearing in mind.

For your overall wellness and long term health, I want you to seriously consider getting some Vitamin D in your life, guys. There’s not much point in having large muscles and being ripped to shreds if you end up getting sick.

To health, energy, youthfulness, vitality and all that good stuff! 🙂