How To Lose Fat 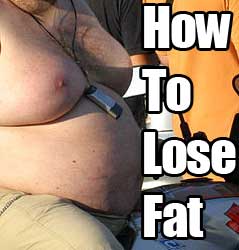 What if I said I could GUARANTEE you ongoing fat loss, week in, week out, until you reach your goal? And it’d be EASIER than anything you’ve ever tried before!

Would you believe me? You should. I really want to help you and it’s pretty easy when you know how.

This is a fun little read but also highly informative. If you don’t know the real facts about how to lose fat 10 minutes from now, I ain’t done my job!

It also might not be what you’re expecting. Read on…

What Is Fat Loss Anyway?

Fat loss is NOT losing fat cells. The number of fat cells you have is genetically determined and there’s nothing you can do about that. 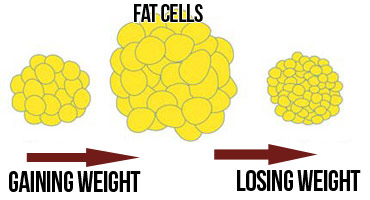 So now you know what needs to be done. Let’s look at how to do it.

How To Lose Fat

The fundamental Truth with a capital T is the first law of thermodynamics.

The first law of thermodynamics states that energy can neither be created nor destroyed. In the weight loss world we equate this with the idea that energy/calories cannot simply disappear. So: 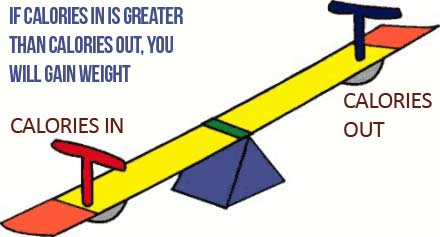 The usual recommendation is to create this deficit by eating 500 calories below maintenance per day. Over 7 days you should lose 1 pound of fat (7 x 500 = 3500). You can calculate your maintenance energy requirements here.

But does it always work out that way?

You and I both know it doesn’t always turn out so perfectly. Everything I’ve said up to now is for normal people whose weight fluctuates up and down by a few pounds. If you’ve gained a few pounds and want to lose them again, all of the above applies to you. 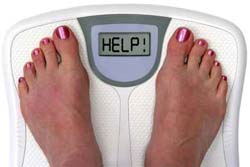 You know the scenario: You busted your butt in the gym all week. You probably did all sorts of aerobic-based programs. You stuck to your diet and at the end of the week…you lost NOTHING! NADA! ZIP! Not even an ounce. I would say 99% of people have experienced this first hand, or know someone who has.

So what happened? I’m going to borrow a little bit from my article ‘Carbs & Weight Loss‘.

We need to look at what regulates our fat tissue. This is primarily the role of insulin. And what is determining the levels of insulin in the body? Predominantly it’s the carbohydrate in our diets.

If you have higher insulin levels than normal, it has the following 2 undesirable consequences:

Also, person A won’t have as much energy as person B because person B’s cells had access to all of that energy, whereas person A didn’t.

I created the analogy of a water butt that people use for irrigation in their garden to explain this. Check it out… 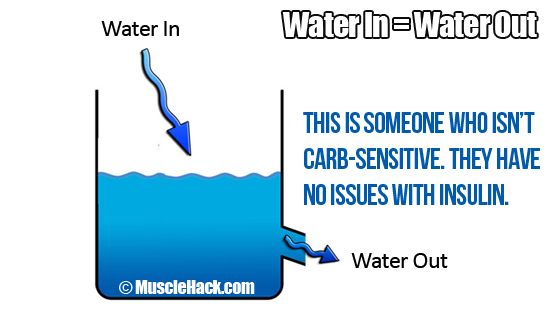 The above non-carb-sensitive person’s weight remains roughly the same over time as calories in = calories out. Now let’s look at the other side of the coin… 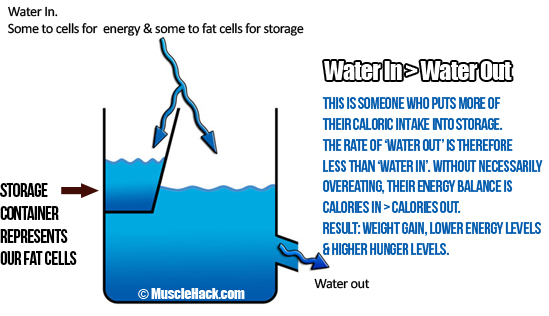 More of what is coming in is going into storage for this person. If this storage tank could expand, as our fat cells can, then slowly over time it would get bigger and bigger.

In humans, however, it’s worse – we get hungry! Since all the energy taken in isn’t reaching our cells to be metabolized (it’s shunted into storage) the body perceives less food and a hunger signal is sent out more frequently than it would be for a regular, non carb-sensitive person.

There’s only so long a person can feel hungry before they have to eat again. Such a person can have a positive energy balance (calories in > calories out) even when they’re eating what is supposedly maintenance calories. But such a person is also more likely to overconsume to compensate for their higher hunger levels. It becomes a vicious cycle. 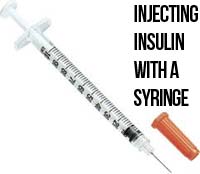 Let me put it this way…

Say you need 2500 Calories to maintain your weight. If I were to overinsulinize you every day this week by injecting you with more insulin, you’d actually get fatter than last week even though you also ate 2500 Calories per day last week.

Let’s say that the extra insulin stored 500 of those daily Calories straight to fat. You’d get fatter, that should be obvious.

But I said the cells of your body NEED 2500 Calories per day to live on. Your body still wants those 500 Calories that went ‘missing’.

Like I said in Carbs & Weight Loss, in this scenario you’re ‘semi-starving’ at the cellular level i.e. your cells aren’t getting all the energy they need. You’ll be hungry, moody, tired, you definitely won’t want to exercise, and you’ll just want to eat so badly! You know as much as I do that it’s only a matter of time before you eat more. (and again some of that will go to storage). Take heart, I’ll tell you the way out of this cycle very shortly. 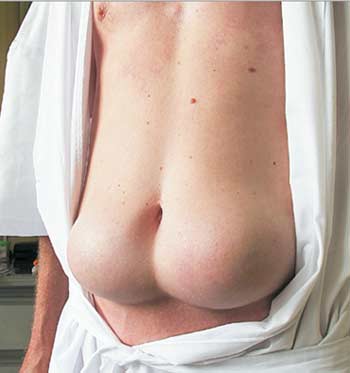 This is a pic of a diabetic guy’s torso who injected insulin into the same spots for years. Diabetics are advised to vary where they inject. Why? Because if they don’t, they can develop ‘lipohypertrophy’, i.e. an accumulation of fat at the insulin injection site. Yes indeed, insulin is the storage hormone.

A trainer’s manual I have at home hints at the truth, but doesn’t quite get there. It does allude to insulin being the energy storage hormone. But then elsewhere in the book states that it is simply a matter of calories in and calories out. Have a look… 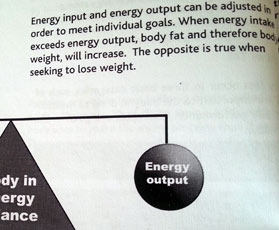 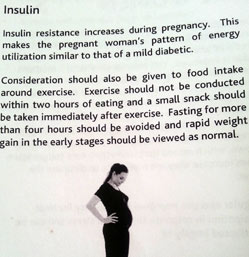 Note how the last line of the Insulin section states that, “Rapid weight gain in the early stages should be viewed as normal” as the client is in a state similar to that of a mild diabetic.

So yes it matters very much what HAPPENS to the calories we eat, not just the AMOUNT of calories we eat. Is a calorie a calorie no matter where it comes from? No. That’s an old dogma that needs to die. The metabolic pathway our calories take depends on where those calories come from. Each macronutrient (protein, carbs, or fat) has a different effect on the body.

How Do I Know If This Applies To Me And What Do I Do About It?

You’ll know if you’re someone who adds fat easily in comparison to the amount of food you eat. If you are truly getting fatter without overconsuming, then this is likely the issue. Also, if you diet and only lose weight for a few weeks then it stops despite your best efforts, there’s something else at play.

So What Should You Do To Finally Lose Fat, Get Lean, and Stay Lean? 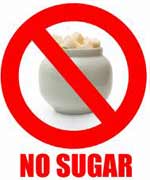 (1) Start off quite easily. For the first week or so, don’t even create a calorie deficit. Simply reduce your carbohydrate intake. Try around 100g of net carbohydrate  i.e. ‘net’ means not including fiber – eat as much fiber as you like. Make sure as little of that carb intake comes from sugar as possible.

(2) You will more than likely lose fat even when eating supposedly maintenance calories because your overall energy levels will increase (calories out) and your body will be freely allowing your stored body fat to be used for energy.

(3) Don’t do any cardio. If you lift weights, continue to do so. In fact, because of its prolonged increase in metabolic rate, a great weight training program is the BEST form of fat loss exercise there is. Plus it builds muscle, and muscle tissue is ‘metabolically active’ i.e. it burns energy even when you’re lying in bed. But there’s no need for any extra exercise on top of this. In later weeks you may factor this in. In fact, with your increased energy, you’ll spontaneously want to move more.

It’s really rather easy when you understand the real science of fat loss.

Remarkably, in contrast to your previous attempts to burn fat, you’ll have more energy and feel a lot less hungry. Your fat cells are deflating (you’re getting smaller) and that stored energy is being released for energy. So isn’t this what we should expect from a diet that actually works?

Remember that the only reason your body stored your calories as fat in the first place was to take it off at a later date. The body does both these processes very well. It’s just that we’ve all been given pretty lousy information about how to go about losing fat for so many years.

After implementing the advice in this article, some of you are going to be literally flabbergasted at how easily you are losing fat without “trying” so hard like you used to, and…you’ll be nowhere near as hungry.

This is exactly the experience of those who get Total Six Pack Abs. T.S.P.A. takes everything I’ve said in this article and supercharges it! Better yet, they continue to get stronger and build muscle while torching away all their unwanted flab. This program details the perfect diet, weight training, and correct type and amount of cardio for getting ripped and muscular.

This single post CAN and WILL help people. Please help in this mission by sharing it in whatever social networking sites you are a part of. You can do this by simply clicking one of the icons below. I would really appreciate it, and so will many others. Also tell your own readers if you have your own site or forum. Thank you 😀