How To Improve Your Bench Press By 10% Now! 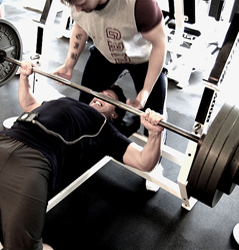 You can INCREASE your bench press pretty much straight away by implementing one little “trick”.

I believe that proponents of super-slow lifts are doing you a disservice, and a new study would suggest that it is faster concentric/lifting movements that produces better results.

Could pushing a weight at almost maximal speed produce a better stimulus for changes in strength and size?

This study [1] would suggest so.

How To Improve Your Bench Press

Basically the researchers found that subjects that pushed the weight at 80%-100% of maximal speed, then lowered the bar more slowly, increased their strength by more than the control group.

The control group, who used a self-selected lifting speed, increased their strength by less than 1% in 3 weeks! So basically nothing.

The faster lifters increased their strength by 10.2% over the same period.

Those of you who have been Muscle Hacking for some time now know that on many lifts I have recommended a 1 second lift, 1-2 seconds lowering for years now.

You can use slightly heavier weights with this kind of cadence, but furthermore I theorized that it also would lead to better muscle fiber recruitment.

That means that a faster lift and slower lowering sends a more POWERFUL signal from the nervous system to the muscle to recruit fibers. And the more fibers involved in a lift, the GREATER the potential growth stimulation!

I can already hear some readers say that they just created extra momentum by pushing faster. Not so.

This is someting that I’ve been saying for years: if it is even possible for you to create momentum by pushing a weight at near maximal speed, then the weight itself is too light. That’s your problem, not the speed of execution.

If you select a weight that forces failure by the 10th rep for example, you just can’t generate momentum with a 1 second lifting speed. Get your weights right, then do this!

Furthermore, if you come here to read the articles and STILL aren’t training THT style – get on it. Read all about THT training here and/or add your name and email into the box at the top-right for your FREE workout program.

So on your next bench, try a 1 second lift and 1-2 second lowering cadence.

Then report back to me! I want to know how you get on. Leave a comment below if you’re benching today or tomorrow!