Why Are Prisoners So Buff? 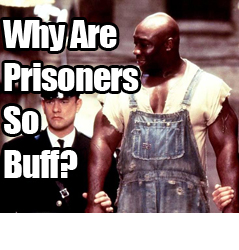 Ever hear this from someone? “Why Are Prisoners So Muscular?”

“Well if that’s true then why are prisoners so buff?!”.

I want to respond to this because it’s a question that’s put to me now and again in real life and on the web.

There are a few points to be considered here. Chief of all is this…

You’re watching way too much TV.

Very few prisoners in real life are buff. Most are actually quite skinny.

But in order to portray a criminal in a movie or on TV as “tough”, they often cast muscular guys to play the role.

But for the very few who are big, you can bet that they were training BEFORE they ever landed in prison.

So their impressive physique was already there before they were incarcerated.

There is also the issue of drug use.

If you think that steroid use isn’t happening on the inside of prison walls, you’re living in cloud cuckoo land. It happens.

Hopefully that’s that cleared up! 🙂