Who Else Wants To Lose 100lbs & Look MUCH Younger? 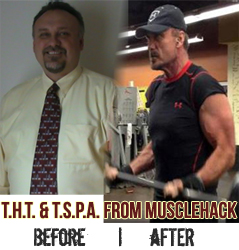 If this doesn’t inspire you, nothing will!

Especially if you’ve got a endomorph body type and feel like it’s hopeless. It ain’t!

While there’s no magic bullet in this game, if you’re willing to put in the work, all you need is a strategy that works.

That’s where MuscleHack comes in!

The following testimonial is from 45 year old Mark House from Princeton, NJ, USA. For verification, this is his email ( mark [at] homeemail.org) and this is his facebook profile.

My name is Mark House and I wanted to share my success story with you. At 45 years old and 297 pounds in November 2010 I decided it was time to transform. I started exercise and dieting and by December 2011 I had lost a whopping 30 pounds. True, weight loss is weight loss, but for all I know it could have been muscle I lost.

In January 2012 I decided to commit and get “serious” about doing this the right way. I needed to learn more and found your site from Brandi McAtee, NPC Competitor, who highly recommended MuscleHack.

I downloaded your THT workout program to learn as much as I could. In April 2012 I purchased your book Total Six Pack Abs and WOW……..71 additional pounds of fat in just 7 months from January-July 2012, for a total weight loss of 101 pounds.

My next and final steps will be to blast through and see those abs once and for all. I can’t wait. I’m taking a bit of a breather since I’m been going full-throttle for 7 months…..but I’ll be sure to share the next photos of my six-pack soon. Thank You for your free programs and for keeping it REAL!!! 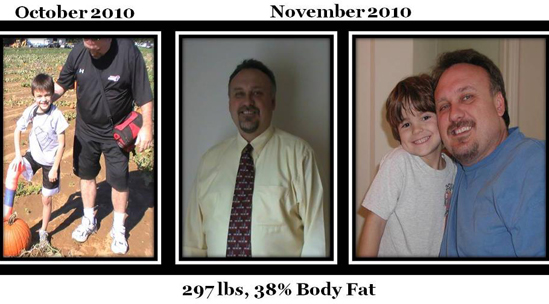 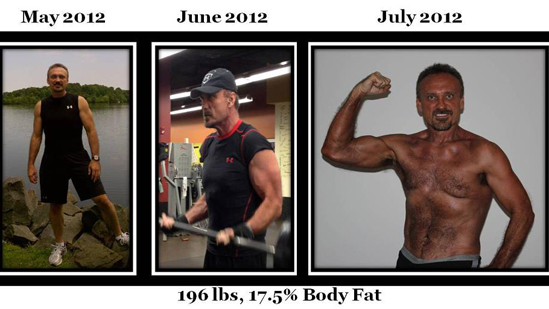 Well done on your success so far, Mark. I’m happy to have played my part.

You’re well on your way to that six-pack from 38% body fat!

And speaking of THT training, I’ll soon be starting work on the latest version of the book 😀

I’ll be posting about it real soon, so stay tuned!