What Is A Fat Flush For Weight Loss?

Can I give you my free workout?

QUESTION: What the heck is a “Fat Flush?”

If you seen the latest before & after testimonial for my fat loss system Total Six Pack Abs, you’ll notice that newly-ripped Liam said he implemented the “Fat Flush” technique for accelerated fat loss towards the end of his 12-wk fat-shredding cycle.

Every time one of my TSPA clients mention this, I get a few emails/messages asking me what the heck a “Fat Flush” is.

And some ask if it is the same technique as found in the original Atkins Diet – a technique by the same name. No it is not.

Dr. Atkins did have something he called the “Fat Flush” for people who had stalled on his diet. It basically consisted of people eating only fat for a while – no carbs, no protein.

Carbs spike insulin levels. High levels of this hormone can prevent the body giving up its fat stores for energy. What a lot of people don’t know is that protein also stimulates insulin release – albiet to a lesser degree. Only dietary fat has no impact on insulin levels.

Therefore, this may be an effective technique for *some* sedentary people. However, us lifters training almost every day, requiring a lot protein, and being in an overall caloric-deficit should NOT consider the Atkins Fat Flush technique.

If we do, it’s almost certain that our bodies will start to break down our muscle tissue to get some protein and convert it to glucose for fast energy (a process known as gluconeogenesis).

In English…you’ll probably lose muscle! Disaster. So many people lose muscle when trying to lose fat. This never needs to happen once you cut intelligently. 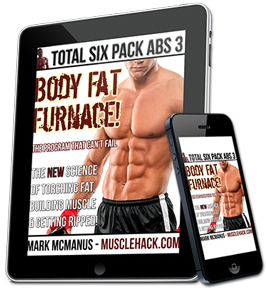 So the Total Six Pack Abs “Fat Flush” is something entirely different.

It IS indeed a technique for speeding up and accelerating fat loss…and it lasts for 24 hrs. Trainees are advised to do a max of 3 of these per week on the program (on alternating days).

I can’t give details on what it is or how exactly it works here as that would be totally unfair to the people who have invested in the program, but I wanted to clarify that it:

Hope that helps & clears up any confusion, guys.

The One-Arm Reverse Pushdown is a great little finisher to your tricep workout. Consider this movement a substitute or replacement for Pinwheel Curls at the end of your workout. Don't even think about replacing one of your main tricep exercises with this (like...
Read More

10 Bodybuilding Supplements You Should Never Buy

2 more kids pack on new slabs of muscle for free with THT. Most impressive is the fact that they obviously have ectomorphic body types. Traditionally, building muscle is a long, drawn-out process for such people. But then again, a lot of programs out there are...
Read More

5 Things That Really Grind My Gears

“You know what really grinds my gears?” I got the idea for this article while watching Family Guy recently. 🙂 So now it’s my turn to vent on things that grind my gears in the world of fitness, bodybuilding, fat loss, and nutrition. Here we go... 1) Stability Balls....
Read More

How People Get Fat & How To Stop It!

Detractors of low-carb, or anyone who believes there's more to it than Calories, often say quite firmly: Calories are the  bottom line! This is usually followed up with: The laws of thermodynamics cannot be violated! No kidding? Do they really think we've never heard...
Read More

How to Add Another Month to Your Year (Yes 13 Months!)

Fancy squeezing an extra month into your year? What would you do with an extra month? How is it possible? Some of you are going to be able to get away with this, others aren’t. The idea for this post came recently when I realized just how much more time I have than...
Read More

The 3 ways to build bigger biceps that I'm about to give you will BLOW THE DOORS OFF how you are currently training them - I guarantee it! Not to mention your biceps will be absolutely TRASHED once your workout is over; probably beyond anything you've ever experienced...
Read More

Yes it’s possible to build muscle and burn fat at the same time. Science has proven it. There’s one key to making it happen…and it’s not that difficult

Beef is an awesome bodybuilding food. But do you know the different cuts of beef? Do you know the nutritional value of these cuts?