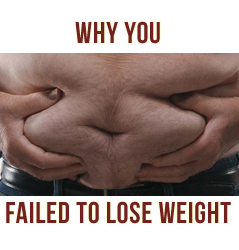 Have you ever tried to get s a six-pack and failed?

Do you know someone who has busted their ass on a diet only for results to come to a screeching halt after a few weeks?

I’m going to explain why that happens.

After all, if weight loss was simply a matter of Calories In Vs Calories Out, weight loss should be mathematically exact and predictable. But we all know from experience that it isn’t.

…DOING TOO MUCH TOO SOON!

If you are “too keen” to see speedy fat loss, you’ll actually end up sabotaging the whole process.

The first reason for this is a slowing in you Resting Metabolic Rate.

Your RMR means the amount of calories you’d burn all day if you just lay on a bed and did nothing. 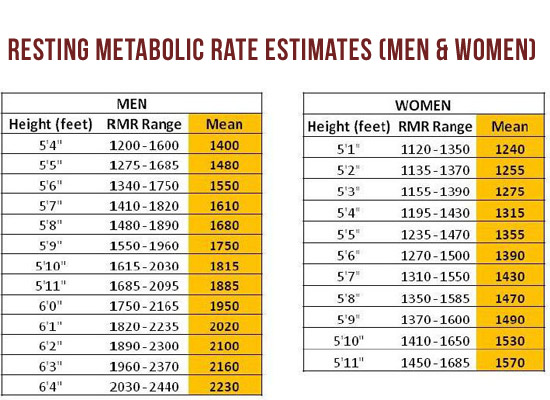 The “Calories Out” side of the equation is the combination of your RMR plus whatever activity you do.

However, if you cut too many Calories from your diet and/or increase activity too soon, your RMR slows i.e. “Calories Out” decreases to compensate from the decreased “Calories In”. And it can be fairly drastic.

We all know a guy or girl who thought it was a good idea to start eating less than a thousand Calories per day and start cranking up their cardio in a vain attempt at quick weight loss. How long did that work for? A few weeks? But how can someone eating 800 Calories and day and doing some form of cardio 5 days a week NOT lose weight?

We are living, biological systems that want to stay alive. If you make the above blunder, your body will adapt by slowing its RMR and preserving as much of its energy stores as possible. You’ve decreased your food intake and increased your activity drastically and, after some initial weight loss, you lose…nothing! Not a single pound. Aside from feeling miserable due to not eating much, the lack of results can drive some people to despair.

It gets worse. There’s more…

Cortisol is a “stress” hormone. It’s usually seen as a “break down” hormone, in contrast to an anabolic hormone, but it’s not all bad. We need it. For example, rising cortisol levels help wake you up in morning.

But people who engage in the type of weight loss strategy indicated above produce CHRONICALLY high cortisol levels – not good. 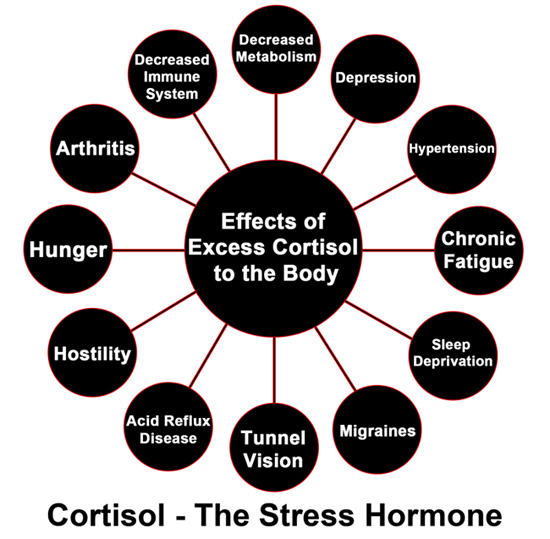 Basically, the body becomes very efficient at storing fat. The body is seeing what you’re doing as a threat to its life and survival mechanisms kick in. This partly explains why when people go back to eating normal levels of food again, they don’t just put the weight back on, they put MORE back on. The body is great at protecting itself, eh?

High cortisol levels can also cause water retention, which will make you heavier and skew your readings when you step on the scales. 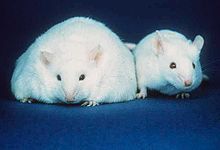 The mouse on the left is unable to produce leptin, similar to a human who becomes “resistant” to the leptin they are producing.

And then we have leptin resistance. Leptin is another hormone. It signals to the brain that you’re full and to stop eating and start burning energy. But chronically high coritsol levels can cause the brain not to “see” the signal i.e. leptin resistance. The result is that it becomes harder and harder to get into a fat-burning mode and you increasingly stay in a fat storage mode. Again, it’s all about survival.

So now you know why your crash diet (that caused you to feel miserable) didn’t work. It was doomed to failure from the outset.

What you need to do is a “step down” approach as I call it. It’s the secret to fat loss success. Taking too many steps at one time produces the above result.

Ongoing fat loss is produced by taking one step at a time. It starts with a modest caloric deficit and weight training. No cardio is needed to begin with. As time passes, calories can be gradually reduced, some cardio added, scientifically-validated supplements introduced. There’s always somewhere to go with this method. For more details on this approach, read my post on it here.

A graduated step-by-step system equals success. Of course, this is built into my fat loss system known as Total Six Pack Abs, and is only 1 of the mechanisms that has produced jaw-dropping transformations in people all over the world! (see the before and after pics of people who took this approach). The following is from a section of the TSPA page…

Your body actually WANTS to give up its fat stores.

THINK ABOUT IT…the only reason the body stores fat in the first place is to be USED AT A LATER DATE.

The problem is that the vast majority of people eat in a way that sends the WRONG HORMONAL SIGNALS to the fat cells; their bodies stay in fat-storage mode as they try desperately to run further, eat less, take fat-burning pills….uurrrgh! Enough of this!

You get it? Your body WANTS to give it up, you just have to work WITH it.

WHAT TO DO IF YOU’RE CURRENTLY STALLED

If you’re actually in this position, don’t keep going round on the hamster wheel! It’s over. What you’re doing WILL NOT WORK. But there’s hope.

Here’s what you need to do…

Take 2 weeks off from dieting and eat at maintenance calories or above. If you’re a woman, eat at least 2000 Calories per day. This will crank up and RESET your metabolism. It’ll also normalize the hormonal environment inside your body.

Surprisingly, you might even find that you lose weight over these 2 weeks – I’ve seen it happen.

Now, go back and cut again, only this time sensibly with a step-down approach.

Are you not cutting at the moment and just want to pack on muscle like these guys did? Download the free THT workout for free here…

Got questions? Let me help you. Ask below…