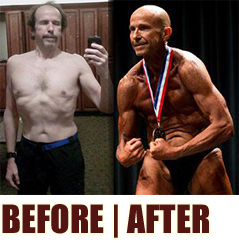 “Never in my wildest dreams did I ever envision myself, at 63 years old, on stage at a bodybuilding contest!”

Would you take up bodybuilding and start to compete in your 60’s? I think it’s an awesome example to set!

I like anything that smashes the self-imposed limits we place on ourselves.

John Davis, 63, from the US did just that. He got the Total Six Pack Abs program and started his journey much later than most of us! Here is John’s facebook profile for authenticity (although I’m sure most of you already know him from the MH page and forum). Here’s John…

I owe all of it to MuscleHack and Mark’s logs, exercise examples, and blogs.

I took extra long on TSPA for 3 reasons:

I made a few tweaks to Mark’s logs and calculations for my caloric baseline. I believe the older you get the less you burn stuff fast and the more protein you need.

So, very lean protein was important and a ton less number of calories. Sounds like fun? It’s not. I don’t care what age you are. Try getting near 10%…and then staying there.

Here is me 2 years ago. (yes it took a long time, but not because of Mark’s program). 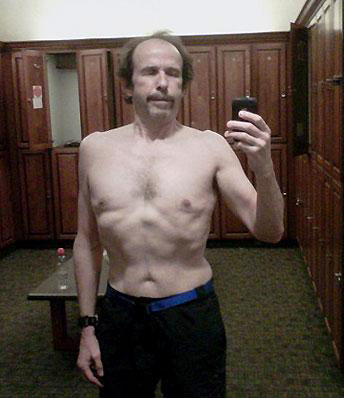 Prepping for a contest makes getting a colostomy look like a picnic. I was a little overweight for my first contest… 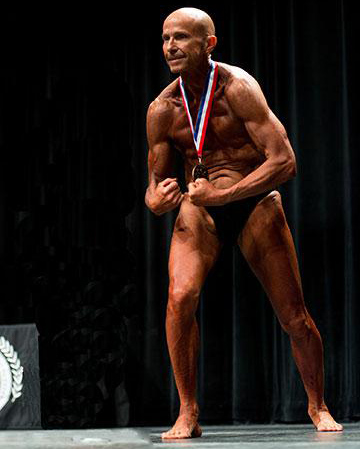 My second contest, 2 weeks later, found me much more prepared. I had a wiser, more perfect peak week.

Hydrostatic dunk test said I was at 10.5% body fat. Originally that was my goal when starting Mark’s TSPA. Bruce Lee Abs!!! 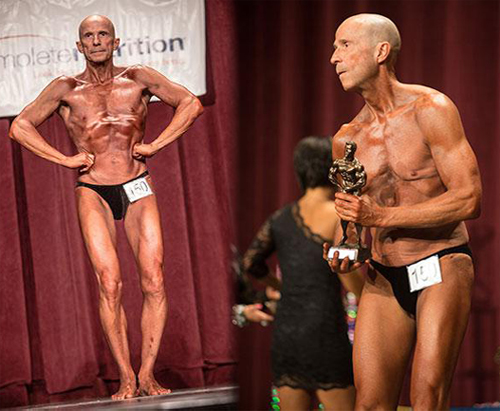 When I walked out there in front of 2,000 people and yanked out my “Most Muscular” pose, the crowd went bonkers! I’ll tell you it was the greatest feeling in the world, representing my age group and all the scrawny dudes of the world. And all I could think about was, “Thank you thank you, Mark McManus”.

The spray tan lady (God, spray tans are a whole other story…”Did you bring a sock?”, ”A sock? What for?”) said to me: “I’ll bet you’ve been dying to be in a show like this all your life!”. My reply: “No…not really”. I was so shy and skinny I was afraid to wear short sleeve shirts!

There is so much BS in the bodybuilding world. When I found Mark’s website it changed my life. His blogs made all his variables make sense. His testimonials inspired me. And from day one I was beating my last week’s records every week. Of course, come cheat day, I turned into a different, lying, rationalizing, whining baby that demanded carb after carb. I think it was because I had little faith that I really was reshaping my body. 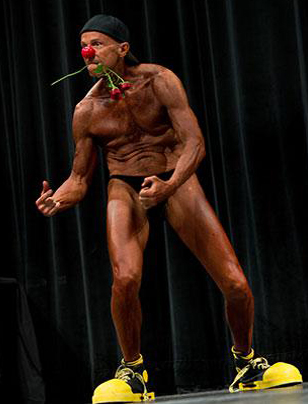 We all had to do a 60 second routine. First contest I picked a clown nose and shoes and at the end rolled off the stage under the back curtains kissing myself. haha! Not much sense of humor in the Midwestern United States. Chief Judge told me at next event she loved it. I remember saying, “Like Hendrix at Monterrey I’m gonna pull all stops”. (They did have to take away the lighter fluid from me so I couldn’t burn my posing shorts on stage.) At the second contest when they handed me the big plastic trophy I pretended to drop it because it was too heavy for me heh heh.

I think everyone should make a try at entering a bodybuilding contest. It causes you to focus better on losing weight, and after you practice the posing you learn what exactly the machines and weights at the gym are doing. So instead of “fighting a machine”, you are visualizing the muscle the way the judges look at it.

Finally, this testimonial’s main goal is to serve as an inspiration to ANYONE, ANY AGE, that they can gain muscle the MuscleHack way! Thank you Mark.

John, congratulations on your competition and achieving the body fat % and abs you wanted. I know guys in their thirties who won’t get started because they think it’s too late for them! At twice their age, you’re putting them all to shame, buddy!

Are you ready to FULLY COMMIT to totally transforming your physique and making it look exactly as you want it to? I hope so!

As always, I’ll be here to help you along!