New – How To Break Through A Plateau 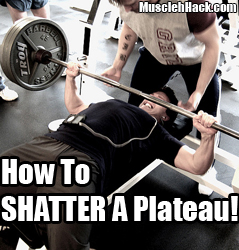 Are you experiencing a sticking point in your training?

There’s a way to POWER through that weight you’ve been stuck on for weeks (months?).

Firstly, plateaus should be very rare on THT if you’re doing it by the book. THT is effectively an anti-plateau program.

But also, make sure it’s not a “plafaux” first – read this article.

Now if you are SURE that you are really stuck on a certain weight, I want you to do 2 things:

Bear in mind that working in a lower rep range means that you must increase the weight.

I’ll explain this best by way of example.

Let’s say a guy is stuck at 100kg for 10 reps on the bench press. He wants to hit 12 reps before he increases the load. However, he’s been on 100kg for 10 weeks straight now. Dude’s getting proper frustrated. Grrrrr!

What he needs to do now is work in a lower rep range, say 4-6 or 6-8 reps to failure. Whatever he feels most comfortable with.

Doing less reps per set means he’ll be able to move more weight. But how much more?

Use the THT rep range calculator to find out.

On his next chest workout he hits 110kg for 5 reps.

Unlike traditional THT training, he doesn’t need to wait until he hits the upper range of that rep range before increasing the weight (6 reps). He’ll go ahead and increase the load next workout by the smallest increment possible.

This is where micro or fractional weights come in handy.

Each week (or every other day on the THT HIT cycle) he adds another tiny micro weight.

Each workout he gets 5 reps.

He then switches back to his old plateau weight of 100kg.

Happily, 100kg now feels like child’s play. He’ll probably get more than his goal 12 reps on his first try.

Now he’s in a position to keep progressing onward and upward unencumbered by plateaus.

So the steps are:

Work in a lower rep range

Increase the load fractionally each and every workout

TIP: If you have no access to micro weights, you can put anything light enough on the bar. You might even tie a towel or 2 around the bar. Use whatever you can. Just don’t use your shorts or they’ll kick you out of the gym. Plus you’ll stink the bar up 😉