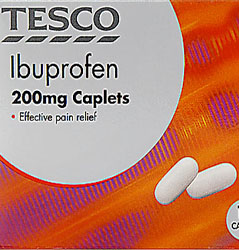 Ok, that’s not advice I really want to give but apparently ibuprofen and acetaminophen are muscle building pills!

A study has shown that taking the regular recommended dosage of ibuprofen and acetaminophen results in greater gains in muscle mass and strength.

The study took 36 men and women with an average age of 65 and put them on weight training program for 3 months. They were each given one of the following:

No-one know what they were receiving until the end of the study.

It was expected that the increases in strength and lean muscle tissue would be observed for the placebo group. Surprisingly however, the groups taking Ibuprofen or acetaminophen saw significantly more increases.

“the chronic consumption of ibuprofen or acetaminophen during resistance training appears to have induced intramuscular changes that enhance the metabolic response to resistance exercise”.

What exactly these changes are, no one knows yet.

The results were as follows:

I have to admit, that’s significant. (Measurements taken at quadriceps).

Bear in mind that we are talking about untrained elderly individuals. Earlier, short term (24 hour) studies showed the opposite effect on young males i.e. protein synthesis levels were reduced compared with the control group.

However, therein may lie the answer. Dr. Trappe theorizes that in the long term the body may try to overcompensate “for an initial blocking of the enzyme the muscle needs to grow — prompting muscles to send out fresh and powerful signals demanding even more enzyme than the body would normally produce.”

Very interesting indeed. You guys know I like to read the theory and then experiment on myself, I’m an experiential type of guy. However, this isn’t one I’m prepared to do right now. If you are, let the rest of us MuscleHackers know how it goes!