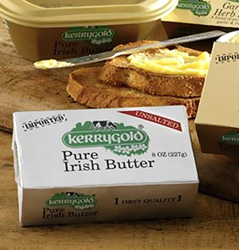 Should you use margarine or butter?

The short answer is: Use butter!

The long answer: Use butter and read everything below 😉

It’s actually a choice between a natural product (butter) and plasticized oil (gross!).

Margarine is made by taking cheap ass oils like vegetable oil (not that healthy in itself) and subjecting them to extreme heat and pressure.

Hydrogen atoms are then shot into the oil, which chemically alters the structure of the fatty acids, and solidifies it.

This is where the term ‘hydrogenated oil’ comes from. This process also creates the bad TRANS fats found in margarine.

By the way, at this stage of the manufacturing process it looks NOTHING like butter. It’s actually GREY in color and smells horrible. They have to bleach this goo first, then dye it yellow, then deodorize it using heat and yet more chemicals.

So if you’re cool with spreading a cheap, plasticized, trans fat-laden, bleached, deodorized, chemically altered oil on your bread, be my guest.

That’s why over half of the fat in mother’s breast milk is saturated fat. Nature knows best!

Trans fats on the other hand contribute to

The only reason margarine came into existence is because a few decades ago people started believing that saturated fat was bad for you and so alternatives had to be found. But the alternative happens to be much much worse!

This belief was based on a terrible study by a physiologist named Ancel Keys. However, Ancel was a little ‘selective’ in the countries he chose for his study. Any country that had a high saturated fat intake and low incidence of heart disease was completely ignored. The study was a load of crap, and so were Mr. Keys’ conclusions. For more on this see an article I wrote many moons ago called ‘The Saturated Fat & Cholesterol Myth Destroyed‘.

I’ll repeat what I stated above…

If you’re cool with spreading a cheap, plasticized, trans fat-laden, bleached, deodorized, chemically altered oil on your bread, be my guest.

If you’re not convinced by this relatively short article on margarine, do your research and make up your own mind. There’s a lot of work out there on the subject.

Be healthy and well 😀