Is The Atkins Diet Safe? Answer May Shock You! 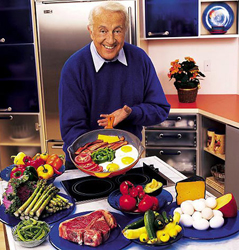 I could have named this article, “25 year vegetarian admits Atkins diet is the best!” and it would have been accurate!

Most people don’t question the awesome effectiveness of low-carb dieting for weight loss. However, the number 1 issue is always, ‘Is it safe?’.

I’ve already blogged about the saturated fat & cholesterol myths but more and more results of studies just keep coming in.

I want to bring to your attention a study conducted by the Journal of the American Medical Association and presented here at Stanford University (Lecture filmed on January 17, 2008).

The lecture below is given by a 25 year vegetarian, Christopher Gardner, probably not the best candidate for telling the world about how healthy a low-carb diet is. However, he is fair and balanced in his approach and seems like his intention is to actually help people succeed rather than push his own preconceptions down people’s throats – how refreshing!

The low-carb diet of choice for this study was Atkins, so if you’re wondering ‘Is the Atkins diet safe?‘, you’ll want to watch this one with interest.

The results aren’t surprising to me in the slightest, but I hope a few of you skeptics start to reconsider what constitutes a healthy diet.

The study involved 311 women over a 1 year period. They were split into 4 groups, each group doing their own diet. At one extreme, we have a very low-fat/high-carb diet. At the other, a very low-carb/high-fat (Atkins) diet with the other 2 diets falling somewhere in between.

Well, guess what diet produced most weight loss? Atkins of course – by now that shouldn’t surprise you.

However, they were also interested in how healthy each diet was. Here’s the point (and something I’ve been stressing for a long time), Atkins beat all other diets in every single health marker – ALL OF THEM.

The Atkins diet saw most improvements in:

To quote Gardner “There was no group that did better than Atkins in anything“.

This is a long video so I’ve made a note of the most important parts for you.