Is Sugar a Poison? 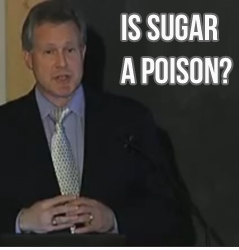 What if sugar was TOXIC? What if the worst thing about sugar wasn’t that it was a source of empty calories, but that it was something that was slowly KILLING us?

That’s the charge by Dr. Robert Lustig in his talk “Sugar: The Bitter Truth“?

It’s been a mega-success on YouTube and you should check it out. There have been 1.5 million views as of 26th July 2011.

To clear something up before we proceed, when Lustig talks about sugar, he’s referring to table sugar (sucrose) and high-fructose corn syrup.

While the Corn Refiners Association like to boast that sucrose and High Fructose Corn Syrup are the same in terms of their biological effects, Lustig says that’s the whole point: “They’re both equally POISONOUS.”

Specifically, Lustig says it is the fructose that is the problem. Fructose is twice as sweet as glucose, which explains why our candy, sweets, and sodas are sweetened with either sucrose or HFCS. (I’ve also heard that it’s hard to find a loaf in bread in America that doesn’t contain HFCS! I think that’s absolutely insane).

So what’s the problem with fructose? It’s in the unique way it is metabolized by the body.

1g of carbohydrate from a potato and 1g of sugar don’t have the same effect on the body despite having the same caloric value i.e. 4 calories.

The potato will be broken down into glucose and metabolized by cells in the body.

The fructose from the sugar will go to the liver to be metabolized. Obviously if we DRINK that sugar, we make the problem even worse by dumping a lot of fructose into the liver quickly. And this is exactly what we do in this day and age, especially kids.

Ok, so fructose goes to the liver to be metabolized. So what? How does that make it a poison?

At 57:20, Lustig says, “What do we call it when we take in a compound that’s foreign to your body and only the liver can metabolize it, and in the process generates various problems?” He then says this is the definition is a poison.

From 58 mins on, Lustig goes into the whole complicated biochemistry of fructose metabolism and how exactly it leads to:

He makes the great point that a high-sugar diet IS a high-fat diet in terms of what the end result in your body is. That’s a point I’ve been making for years and one that the average Joe on the street can’t or doesn’t want to understand.

Regarding the above problems he concludes, “Looks like metabolic syndrome to me”.

He puts up the following list of the effects of chronic overconsumption of ethanol (poison) and fructose to compare the two. 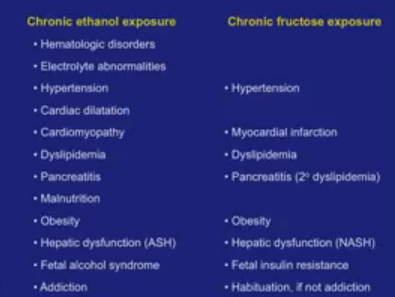 Regarding fructose’s role in causing obesity through overconsumption, Lustig is making the point that we actually end up eating more because of it.

But why are we eating more? He states that we eat more now than we ever did because our leptin (a hormone that tells our brain that we’re full and don’t want any more food) isn’t working like it used to.

Why isn’t our leptin working like it used to? Our diets have a higher percentage of fructose than they ever did before, (see video for figures) and fructose does not stimulate the release of leptin.

So those calories we get from fructose aren’t making an impact on our satiety and we therefore overeat. Obviously then the higher the percentage of our daily calories that come from fructose, the worse the problem becomes. He says that if you pre-load a kid with a can of coke before a meal, he’ll still eat the same amount of food even though he just consumed ~150 Calories.

It’s funny how people who “just can’t eat another bite” after a large meal can always find room for a sugary sweet.

Now on to dyslipidemia and heart disease…

As I’ve stated for a long time now, LDL isn’t a marker for heart disease in itself. It’s only the VLDL that matters in that regard. Since most of our tests only give us a total LDL reading, Lustig says that you can determine what has happened to your VLDL by looking at your HDL in relation to your triglycerides.

The ideal scenario is high HDL (good) cholesterol and low triglycerides. Lustig says that this relationship predicts heart disease better than LDL ever did. From my years of looking into this, the typical result of someone going on a low-carb diet is higher HDL and far lower triglycerides.

At 38:40 in the video, Lustig says that dietary fat raises your large bouyant LDL, but it is carbohydrate that raises your small, dense VLDL cholesterol. The biochemistry of this starts at around 58:00 minutes in the lecture and the lipogenic (fat-making) property of fructose is broken down at around 1hr 4mins.

To quote Gary Taubes talking about Lustig’s video, “It very well may be true that sugar and high-fructose corn syrup, because of the unique way in which we metabolize fructose and at the levels we now consume it, cause fat to accumulate in our livers followed by insulin resistance and metabolic syndrome (44:30 in the talk), and so trigger the process that leads to heart disease, diabetes and obesity. They could indeed be toxic, but they take years to do their damage. It doesn’t happen overnight.”

And that is exactly the problem because fructose (from sugar and HFCS) has found its way into everything in our food. From bread to sauces, drinks, pretzels, low-fat snacks, hamburger buns…the list is unfortunately endless. It’s cheap for the manufacturers and it makes their products taste better.

We’ve become addicted to the taste of sweet, so manufacturers know that if they take HFCS out of their products, the public will purchase from their competitors instead.

But why should YOU wait on the rest of the world to wake up to this? Being a reader of this site, you have 2 advantages:

NOTE: The recommendation is not to avoid all fructose, especially in its natural form. Nature gave us fructose, but packaged it with a LOT of fiber – fruit. Personally, the only place I get fructose in my diet is from berries, apples, peaches, and the occasional orange.

I also found this very interesting 6-part documentary from 1986 on the effects of sugar. You’ll note some parallels here with what Lustig is saying…