How To Live A Life Without Limits 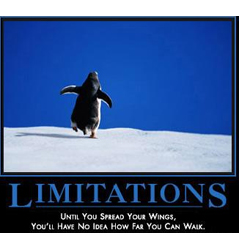 The word ‘LIMITATION‘ is so repulsive to me.

The idea that I CAN’T do something, or that there’s only so much I can experience is too horrible to contemplate.

Holding the opposite attitude will change your life, and I can prove it.

Einstein said the following and is worthy of memorizing….

“We are boxed in by the boundary conditions of our thinking”

What boundary conditions have you placed on your life?

Are you boxing yourself in?

Our experience of life is ENTIRELY shaped by how we think, so isn’t it really stupid to go around telling yourself that….

That sort of thinking will get you NOWHERE. You won’t even consider other possibilities and you’ll end up stuck in a rut. You’ll want to make that box you’ve built as comfy as possible because you’ll be in it for a long time!

“But They’ll Call You ‘Polyanna’!”

So what! Thinking on the positive side is the ONLY thing that makes sense. If things are going well, it makes them even better. If they aren’t going so well your attitude will serve you tremendously in giving you the energy, certainty and enthusiasm to move forward.

Negative thinking will do the opposite of all the above.

The result? Stagnation At Best | Hopelessness At Worst.

While I’m far from perfect at this, I get better all the time. Don’t strive to be perfect, but start the PROCESS today.

How To Get Started

To start living a more FREE life; a life without limitation, I suggest you start by just saying YES to more things.

I recently saw a movie called ‘Yes Man‘ starring Jim Carrey. The basic premise is that saying YES to the opportunities in your life will always lead  to something good. Jim Carrey plays a ‘No Man’ at the beginning of the film. His life sucks, he does nothing and goes nowhere.

After being persuaded by a friend to attend a ‘YES‘ seminar, he HAS to say YES to every opportunity that comes his way. Sure enough, his life is completely transformed.

Each decision, no matter how small, will take you in a different direction. Because of the laws of cause and effect, any decision you make changes the course of the rest of your life – it can be something small or something big.

Here’s an example. A guy needs some household things from his local corner shop. He decides to walk it rather than take the car. When he’s there he bumps into an old friend, something that wouldn’t have happened had he took the car as walking took 15 minutes longer. So they swap phone numbers and meet up for a pint later that week.

In time he meets all his friends’ friends, holidays with them, falls in love….all that good stuff. So he ends up living a COMPLETELY different life than he would have if he had taken the car that day.

An example from my own life would be the decision to first start lifting weights, which in itself came about by a chance meeting with a friend of a friend. If that hadn’t have happened, you wouldn’t be reading this article right now, and WHO KNOWS what my life would have looked like.

Try this out, the next opportunity that presents itself to you, say yes inside yourself and think about what might happen. If there’s no threat of anything bad happening, go for it!

You NEVER know where it may lead.