How To Get Six Pack Abs 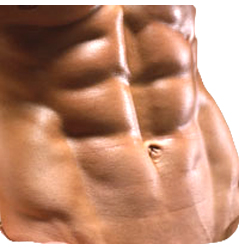 Everybody wants to know how to get six pack abs.
Great question! It’s what lead me to my whole nutritional philosophy and ultimately my success.

I was desperate for abs until I actually had to formulate my own strategy that would guarantee their attainment. My research was based on info from the best in the field of fat-loss and muscle development.

First let me tell you my story….

In school I was always a skinny kid. I am predominantly ectomorphic in body type which to be honest, pissed me off big time.

Then I had an idea – “I’ll start bodybuilding!”

So there I was aged 17 (10 years ago now, where did the time go?!) looking for advice in the world of bodybuilding. Everywhere I went the conventional wisdom was to just eat like it was going out of fashion, so I did.

Sure I added a few pounds of muscle but I also added a LOT of fat, and it seemed that most of it was around my gut. Annoyed that I was getting fatter and not more muscular, I quit six months later.

What was I going to do?

Not knowing any better I went back to bodybuilding and implemented a high-carb diet (about 7 years ago now). After a year or so I knew I had to tackle that gut. The feeling of fat hanging over my belt when I sat down just annoyed the hell outta me.
Time for action.

So again I went with conventional wisdom and cut down on fat intake and did plenty of cardio.

Results were slow, very slow. Also, it seemed that for every pound of fat I lost, I lost a pound of muscle too. About 4-5 months later I went back to bulking because I had lost too much muscle and had undone all the previous year’s work.

So there I was, back to stage 1 – a skinny fat bloke trying to add muscle but packing on fat in the process.

Basically, if you repeat this process over and over for 4 or 5 years you’ll have an idea how those years turned out for me.

Out of sheer frustration I started asking myself 2 questions…

I found the answers.

The answer to question one has resulted in what is known as the MANS bodybuilding diet (or GLAD for those who find it too difficult to cut carbs).

The answer to question 2 has resulted in the book Total Six Pack Abs.

How To Get Six Pack Abs

The battle to get six pack abs is fought on 3 fronts. If any one of these component parts is missing you’ll either fail or make life extremely difficult for yourself.

Here is the triple-action strategy for the fastest way to get six pack abs:

(1) Implement a Truly Fat-Stripping Diet. Contrary to popular belief it is diet that plays the biggest, most pivotal role in getting a shredded mid-section. The bulk of your work will go into getting your body fat percentage below 10%. When you understand how to get your body to burn fat (and I mean body fat, not dietary fat) for fuel, you’ll accelerate your fat-loss like never before. As I say in the book, you don’t have to wish or hope for results on this program, it is a bio-chemical certainty that you’ll be burning body fat all day long! A low body fat percentage is not a question of ‘if’ but ‘when’ with the Total Six Pack Abs diet.

(2) The Best Cardio For Fat –Burning. Very low body fat percentages are attained with very effective cardio that works synergistically with the diet that allows you dip into your fat stores for energy. Imagine a cardio routine that:

(3) A Truly Abdominal Muscle Building Workout. Contrary to what many think, building up ab muscle is actually the easiest part of getting six pack abs. You DO NOT need a complicated routine. You need basic exercises that continually force the muscle to adapt to increasing demands.

Weighted resistance is a must, just like any other body part. I’ve built my biceps with 2 or 3 simple exercises, why would people think abs are any different? Don’t fall for the hype, complicated ab routines are for the gullible or the misled. The Total Six Pack Abs workout is simple yet powerfully effective.
I see other programs out there that give you 10 free bonus ebooks, CD’s, 5 free reports…What For?? It’s all unnecessary drivel to justify jacking up the price. On top of this, it’s certain to leave the customer completely confused which is the opposite of what they need.

Believe it or not, getting six pack abs is not rocket science. There’s a strategy that works that you need to learn – Learn it, get six pack abs and keep them forever – simple.