How People Get Fat & How To Stop It! 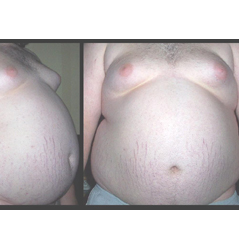 Detractors of low-carb, or anyone who believes there’s more to it than Calories, often say quite firmly:

Calories are the  bottom line!

This is usually followed up with:

The laws of thermodynamics cannot be violated!

No kidding? Do they really think we’ve never heard of the laws of thermodynamics, or that we believe in magic or something?

So to them, everyone else is a quack. It’s not that they know something we don’t, it’s that they haven’t taken the time to actually learn what we’re saying.

In short, I agree with the statement that ‘Calories are king’. This was what Anthony Colpo has been saying for quite some time, and in my opinion, he done a lot of people a good service by saying it.

Some people were under the impression that so long as they ate low carb, they could eat as much as they wanted and still lose fat. In fact, some were/are under the misguided impression that you can low-carb your way to a six-pack, irrespective of Calories. I think Colpo puts that to bed in his book The Fat Loss Bible.

So if Calories are king when it comes to getting lean, why go on a carb-cycling diet? 2 reasons:

I cover body composition quite thoroughly in Total Six Pack Abs 2, presenting studies proving that you’ll keep more muscle mass on my diet. You’ll also limit, but not completely eradicate, hunger. So I’ll let the book deal with those issues, let’s focus on Calories for now.

Let’s say that you could clone yourself, and that both of you want to lose some weight. You lock yourselves into a metabolic ward and eat the exact same amount of Calories, but with differing macro nutrients, would you lose the same amount of weight? In my opinion, yes you would.

Again, the favorable changes in body composition are enough on their own to warrant taking lower-carb route. Aside from that, we aren’t clones and we don’t live in metabolic wards.

Imagine that you ate a diet that actually stimulated MORE hunger! Imagine the Calories that you ate weren’t reaching the cells to be metabolized as planned, but were shunted off to be stored as fat. You’d get hungry again pretty quickly because the body isn’t sensing that you are eating as much as you really are.

You’d feel that hunger signal again and want to eat. Let’s explain by way of an excellent video from Fat Head the movie.

Like Dr. Eades said, if the food doesn’t reach the cells, we starve at the cellular level. Yes you ate it, but you didn’t benefit from it because you stored it instead.

The cells then say, “Hey, where’s the food”, and the hunger signal kicks in and tells you to eat again prematurely. This is actually unnatural. You should be able to trust your hunger signal.

If it’s unnatural, what’s causing it?

Insulin. Insulin is a storage hormone.

How do we elevate our levels of insulin? Eat lots of carbs, especially refined carbs and sugars. Eating in such a way elevates your blood sugar, and since high blood sugar is toxic, insulin is released to mop it up. If you’re body is not in a hurry for sugar (eg. your glycogen stores are empty), you’ll end up wearing those carbs as fat.

To make matters worse, eating this way for a number of years can also lead to insulin resistance. This means that your insulin levels have been so high for so long that your cells become resistant to its effects. The body’s response? Produce even more insulin.

So you get even fatter, and you severely increase your risk of becoming diabetic.

If you want your body to AUTOREGULATE your appetite to normalcy, control your insulin. I am doing this with the GLAD diet for bulking, and I use Total Six Pack Abs for cutting because I want my body to freely release its fat stores…. AND release a lot of it!

As a side note, since we lifters frequently empty our glycogen “tanks”, we can get away with carb-ups, or a higher Glycemic Load than the sedentary guy.

I’ve seen the following time and time again, maybe you have too. A young guy starts lifting and eating pasta, potatoes, bread, and so on like it’s going out of fashion. After all, he needs 500 extra Calories a day to build muscle, right? (he doesn’t). And fat’s bad for you, right? (it isn’t). So this necessitates a very high carb diet.

In a few months to a year’s time, he’s quite a bit fatter. While he has built a few pounds of muscle, he’s also built a couple stone of fat. 1 stone = 14 pounds.  When he gets sick of holding his gut in in public, he knows it’s time to cut. I just hope he doesn’t go to the same sources for his cut that he did for his bulk. D’oh!

So now you should understand that there is no violation of the laws of thermodynamics. However, it is still true that carbs can make you fat, and now you know why.

So when they say, “It’s all about energy balance, not any particular macronutrient”, you can say that you generally agree, but you’d like them to read this post for the rest of the story.