How Many Reps To Build Muscle? 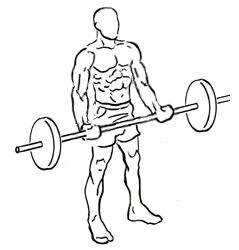 How many reps are optimal for promoting muscle growth?

It’s a question that is asked all the time. And there’s also much confusion over the issue. However, it CAN be answered.

While there is no magic number of reps, we can be sure that there is at least a RANGE within which our efforts produce the desired result i.e. increases in muscular size and strength.

For the purposes of this article we’ll be looking into the findings of the following review:

How Many Reps To Build Muscle

So let’s not beat around the bush. What was the conclusion of this review….

~30-60 total reps per bodypart per workout is optimal for building muscle.

There are many ways to break this 30-60 reps down and I won’t go into them all.

However, to get 72 reps you’d have to be hitting 12 reps on each of your 6 sets. The majority of MuscleHackers will perform 40-60 reps per body part the vast majority of the time.

In the HIT Cycle, we use a slower cadence which takes about double the time of a Volume cycle rep (about 7 seconds compared to 3 seconds). Our 7-10 HIT reps are more like 14-20 reps when you level out the “Time Under Load”.

Though this may be at the low end, we hit each body part 3 times per week in the HIT cycle. Furthermore, I provide concrete proof in the free book that such a method (1 set) DOES promote muscle growth on the condition that the set is brought to the point of momentary muscular failure.

Speaking of muscular failure, this paper goes on to say…

“Regarding intensity, moderately heavy loads seem to elicit the greatest gains for most categories of training, although examples of very high rates were noted at both very low and very high intensities when the sets were performed with maximum effort or taken to muscular failure.”

Basically this means that muscle growth can be seen using many different percentages of 1 rep max (1RM). From lighter sets and higher reps, and also low reps with a heavy weight. However, this is conditional upon taking those sets to failure.

However, this was also provided that these high-rep sets were done to failure.

Now, don’t rush out and change your workout straight away. This study didn’t measure protein accretion i.e. the net after subtracting protein breakdown from protein synthesis. Since the breakdown was almost certainly higher in the higher reps group, I think this might explain the findings.

I quote the study, however, to show the desirability of taking a set to failure. Those 30-60 reps can’t be done with just any weight. If you divide it up into 6 sets, you must select a weight that forces failure in all 6 sets (anywhere between 5 and 10 reps).

You need to use a load above about 60% of your 1RM in order to recruit all the available motor units.

At 60% you’ll recruit them all after you’ve completed a few reps. If you go as low as 30% RM, those fast-twitch bodybuilding fibers will only come into play at the very end of a set.

Similarly, going too low and performing 1 or 2 reps to failure will use the 2b fibers predominantly. While we DO want to recruit these fibers, we definitely want to use our 2a fibers in every set when training for maximal hypertrophy.

If you take a set to failure in a moderate rep range, you’ll recruit your 2b fibers. But you’ll also recruit all the other fibers in the process. This is because muscle fibers are recruited sequentially (see this post for more).

When training in this manner, at the end of a set when muscle fibers are fatiguing, rate coding increases to help you keep producing the necessary force. “Rate coding” is simply the frequency of the signal that is sent to the motor units to contract. Increased coding means a higher frequency of signals.

It is for all these reasons that I named my training program Targeted Hypertrophy Training, which includes rep ranges from 5 (deadlifts) to 12, and will produce optimal muscle growth if you take those sets to failure.