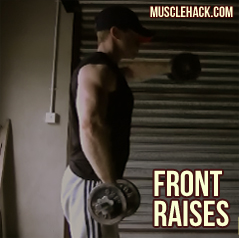 You can start doing front raises with MAXIMAL effectiveness if you give me just 2 minutes to explain something important! Read on my hacking buddies…

This exercise will target the shoulders and in particular the Anterior or Front head of the deltoids.

I will discuss all this in greater detail after the video…

How To Do Dumbbell Front Raises

Firstly, use a light weight to begin with on this movement. As weeks pass and you get stronger increase the weight by the smallest increment you can. I call these “micro-progressions” and are pretty much mandatory for all lifts that utilize a relatively low weight. Personally I increase the load by just 0.5kg once I hit the top of my prescribed set range.

Grab dumbbells in both hands. Position the weights in front of your upper legs with your elbows slightly bent. Palms will be facing in towards the body i.e. wrists are fully pronated.

Before you start the movement, allow your torso to fall forward a little. Keep your back straight and strong. Have a slight bend in the knees.

This is the start of “optimizing” your form on this movement. Without it you’ll move very little weight and the set will terminate way before true failure of deltoids. Furthermore, you WILL plateau after a few months and be unable to make any further progress.

Front Raises are best done in an alternating fashion. So you will work 1 arm at a time.

Initiate the movement with just one arm while the other rests.

Raise your arm upwards (remember that slight bend at the elbow) up about 1/4 way of the range of motion before allowing your back to come into play and really optimizing this bad boy. At this point bring your torso back into a straight up position while still moving the dumbbell.

Raise the dumbbell upward until the upper arm is just above horizontal – this is the top of the movement. Lower slowly under full muscular control and allow your body to come forward again in preparation for the next rep.

Now repeat with opposite arm.

NOTE: Optimized form is NOT swinging. Anyone that tells you it is hasn’t a clue what they’re talking about. You INITIATE the movement with the intended muscle only. Once it’s already moving, that’s when you allow some complimentary movement in another part of the body.

Some joints in the human body just don’t operate very well at a certain range in the motion when totally isolated. It’s simple biomechanics and it is the way it is whether you like it or not. Repeat: It is NOT swinging the weight.

Furthermore, unless I recommend optimized form in a movement, use normal strict form.

Now, go do your front raises with this form and I’ll be happy to hear about how much progress you’ve made in just 1 workout with this MuscleHack tweak.